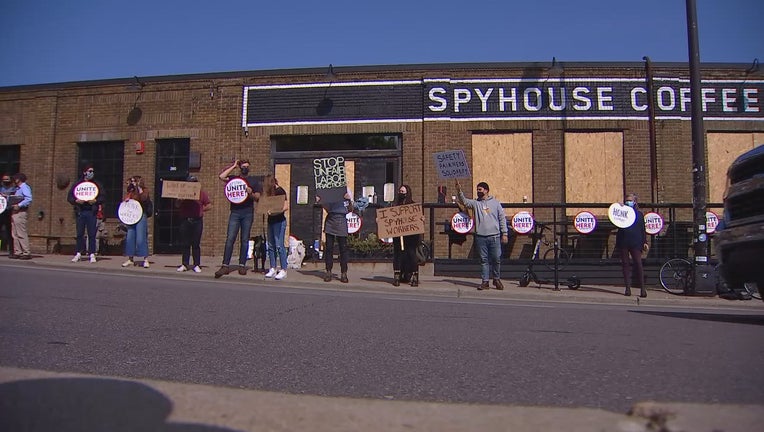 Workers rallied outside a Spyhouse Coffee location in Minneapolis. (FOX 9)

MINNEAPOLIS (FOX 9) - Spyhouse Coffee employees were shutting doors around the metro on Saturday, as part of a strike for protections on the job during the pandemic.

The one day strike was taking place at all five Spyhouse locations around the Twin Cities. The employees say they want to feel safe at work and they want ownership to recognize their union.

Spyhouse Coffee employees were shutting doors around the metro on Saturday, as part of strike for protections on the job during the pandemic.

Dozens of Spyhouse Coffee employees around the metro refused to open the doors Saturday in an attempt to make what they feel are needed changes.

"A lot of the things that we’ve been asking for we don’t really think they’re super unfair to be asking for," said Grace Erpenbach, a former employee. "We’re not feeling protected, we're not feeling safe on the job there has been no discussion of hazard pay and any changes they’re willing to make have been really slow."

Among the asks of the 34 employees, they are demanding more safety measures, like a reduction in hours, a better mask policy, and more social distancing enforcement.

"Just a lot of policies going on that make it feel unsafe at work," said worker Jonah Mische. "Hard to do what we want to do here which is just simply to bring coffee to people."

Employees say they also want their unionization to be recognized by management.

"We've been talking in a more conventional manner for the past couple of months and it hasn’t done what we want it to do," added Mische.

"Right now, bosses are asking workers to come back and work in very unsafe environments and they're not taking the steps that they need to make sure their customers and employees are safe," said union representative Sheigh Freeberg.

Employees say they have been trying to unionize for about a month and, according to Grace Erpenbach, It was her support of the union that cost her job.

"They asked me if I would help them stop the union and I said no, and they fired me," said Erpenbach.

Employees say plexiglass barriers were installed at the cashier counter, but they hope Saturday’s strike will bring even more changes.

FOX 9 did reach out to the owner of Spyhouse Coffee Saturday for a response to the strike and have not yet heard back.