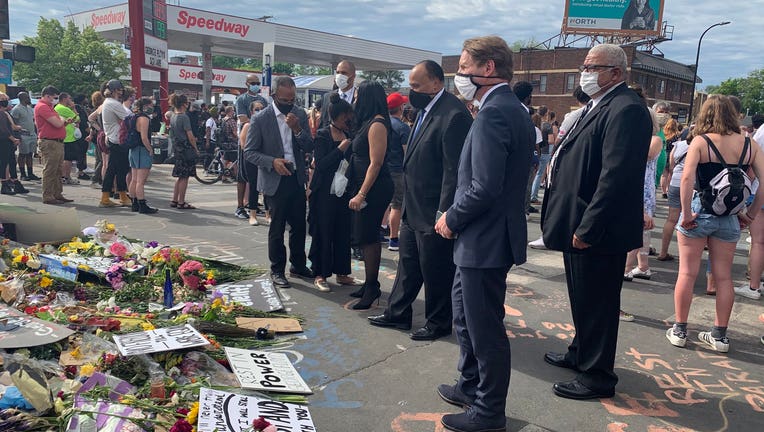 Martin Luther King III visits the memorial at 38th and Chicago in Minneapolis.

MINNEAPOLIS (FOX 9) - The widespread ripple effect of the death of George Floyd was evident Thursday as a number of faith leaders, activists, and familiar faces joined protesters at the site of Floyd's death on the day he was remembered in Minneapolis.

Because of COVID-19, there was a small gathering inside the memorial service but outside the message was loud and clear.

The widespread ripple effect of the death of George Floyd was evident Thursday as a number of faith leaders, activists, and familiar faces joined protesters at the site of Floyd's death on the day he was remembered in Minneapolis.

Throughout the day, a large crowd gathered at the intersection of 38th Street and Chicago Avenue. The site has become a sacred ground to many as it plays host to a living and growing memorial to George Floyd. It's become a place to talk, grieve, love, and hope.

"We’re just here to listen to what the communities saying and it’s just awesome to be around," said Steve Carlisle of Vine Church. "I mean you have black people, white people, you got brown skin and that’s where we want to be at."

…And to teach their children. 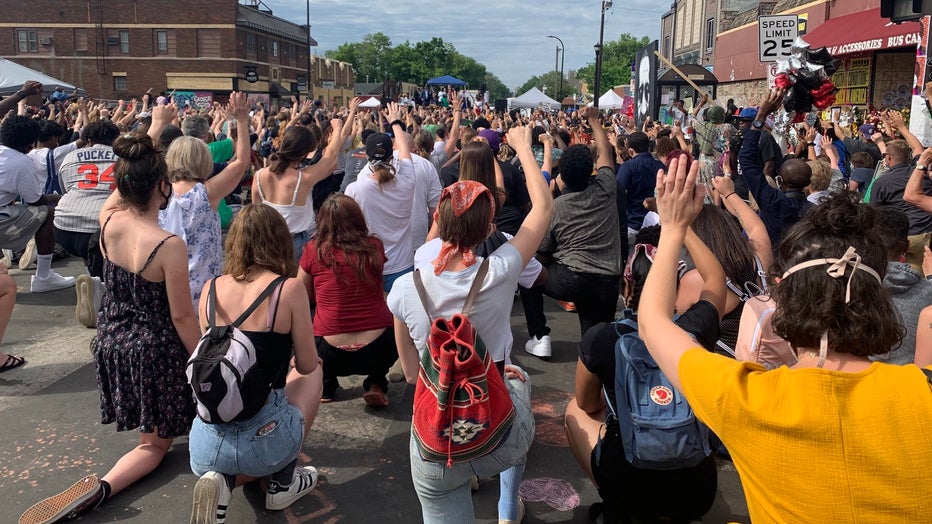 The crowd at 38th and Chicago kneels to pay respects to George Floyd.

"I thought this would be a really good opportunity to answer those questions and for him to just kind of see what’s kind of going on out here and how important he is to our community," said Queen Jacobs.

The official memorial service for George Floyd was held on Thursday, about two miles from the site of the memorial on 38th and Chicago Avenue.

"We got all sorts of people here and these people are coming out to say enough is enough we feel the pains of these people," said Julious Hoff.

As the days have gone by, there have been tough conversations and tough moments. But there are signs of something else.

Reverend Jesse Jackson took to the stage during the afternoon, and shared his advice for the journey.

"Never give up, never surrender," he told the crowd.

As the family joined the protest, the crowd let the Floyd family know George Floyd’s death won’t be in vain.

"We know change is going to come," said Hoff. "It comes gradually. It won't happen overnight but at least we stood up for our rights. We took a stand and this is the outcome of our voices being heard."