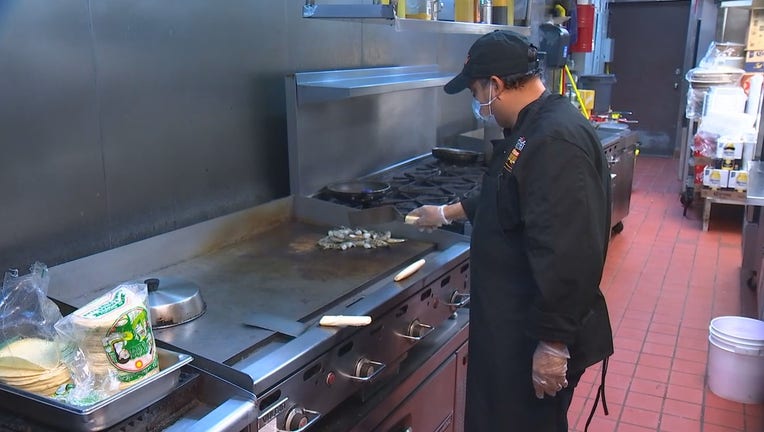 El Tejabar in Richfield, Minn. is giving away meals to kids as a show of support for its loyal customer base.

RICHFIELD, Minn. (FOX 9) - El Tejabar, started by a mother and father and managed by their son and daughter, opened during a recession 12 years ago and now the family faces another crisis.

Their resilience has allowed them to quickly adjust and ask how they can give back to those that have given so much to them.

El Tejabar, started by a mother and father and managed by their son and daughter, opened during a recession 12 years ago and now the family faces another crisis.

Currently, an unfamiliar quiet fills the family-owned restaurant that is adjusting to a new normal in its 12th year of existence.

Nine weeks ago, they were forced to close. Since, they’ve learned that if they want to survive, they have to adapt.

“We had to switch up really quickly and change or restaurant,” said Hernandez. “We feel like we’re not running the restaurant we had before. It’s a completely different thing.”

The restaurant is running strictly on takeout with food that is often made by Hernandez and his father. It’s packaged up and handed to their customers by Dianna Hernandez.

To return the support they’ve received by their customers, the family is offering free kids meals to anyone under the age of 18. It’s a small gesture of thanks for the continued support.

While the door may not open quite like it used to and while the tables may no longer hold big family meals, the Hernandez family says despite it all, they won’t give up and they won’t stop serving.

“We have to keep moving, because it’s the only thing we can do,” Hernandez said.

The family says they are not sure what the restaurant is going to look like come June 1, but they do know it won’t be the same. They are playing with other ideas right now and hope to make some headway on a new kind of dining experience soon.

In the meantime, they are still doing takeout and still offering those free meals for kids under 18.