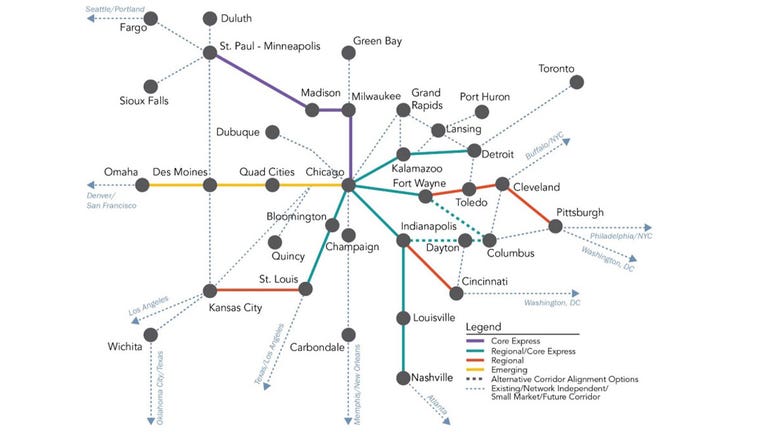 MINNEAPOLIS (FOX 9) - A newly-released plan from the Federal Railroad Administration proposes creating high-speed rail lines that would connect the Midwest including Minnesota.

The new Midwest Regional Rail Plan proposes a "40-year vision" to create a high-speed rail system that would pass from Chicago, Milwaukee, Madison to the Twin Cities, along with other branches and cities in the Midwest.

According to the study, the rail plan would be built on "four pillar corridors" including the Chicago to Minneapolis line, Chicago to St. Louis, Chicago to Indianapolis, and Chicago to Detroit. The rail system would allow for speeds up to 110 miles per hour on some sections of the system.

When complete, those pillar lines would offer 24 trains per day, while regional lines, like St. Louis to Kansas City and Fort Wayne to Pittsburgh, would offer 16 trains a day.

While the Twin Cities would serve as an end to one corridor, the plan wouldn't include changes for trips from the Twin Cities to Fargo or Sioux Falls. However, the study lists a line to Duluth as "warranting emerging service."

The study from the railroad administration says plans could add a "regional" line running from the Twin Cities to Rochester.