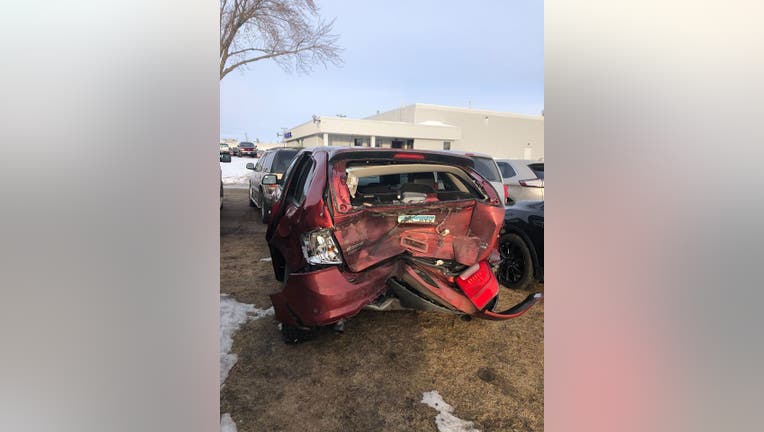 The aftermath of the crash shows the back of the car was seriously damaged. ( Lon Thiele )

OWATONNA, Minn. (FOX 9) - The Steele County sheriff is on a mission to make sure drivers are paying attention behind the wheel after a close call this week, involving his wife.

Sheriff Lon Thiele believes his wife is lucky to be alive after he says she was hit from behind by a distracted driver on her way home from work Monday. He shared the news on Facebook, but he says he nearly didn’t post it.

The Steele County sheriff is on a mission to make sure drivers are paying attention behind the wheel after a close call this week, involving his wife.

He reconsidered when he realized the power his family’s personal story could have.

“That was kind of my idea putting it out there, saying my wife was almost taken from me – come on, people, wake up... put the phone down,” he said.

Sheriff Thiele shared that his wife had been hit on her way home from work along Highway 14 in Dodge County. She had stopped to wait for the car in front of her to turn when another vehicle came from behind and didn't slow down.

“Next thing you know, she looked up in the mirror and saw that impact coming – and braced herself the best she could. She’s recovering but has a lot of soreness all over,” said Sheriff Thiele.

Photos of the aftermath show that the back end of her vehicle was completely crushed.

“The first thing I thought of when I approached the car was everything was pushed in so much and so close to that backseat where my little girls sit,” he said.

As he tries to keep the “what if’s” from creeping in, the focus now is on family as his wife recovers.

“Unfortunately someone wasn’t paying attention, but God was watching over her,” said Sheriff Thiele.

He hopes by sharing the story, he gets the message out: no distraction is worth it.

“If my message gets across here and saves lives by getting the point across, put that phone down. It’s not that important, and if it is, pull off the road where you can safely use it - good, that’s what I’m looking for,” he said.

According to the Minnesota State Patrol, the driver responsible for the crash was cited for careless driving. The crash is under investigation.