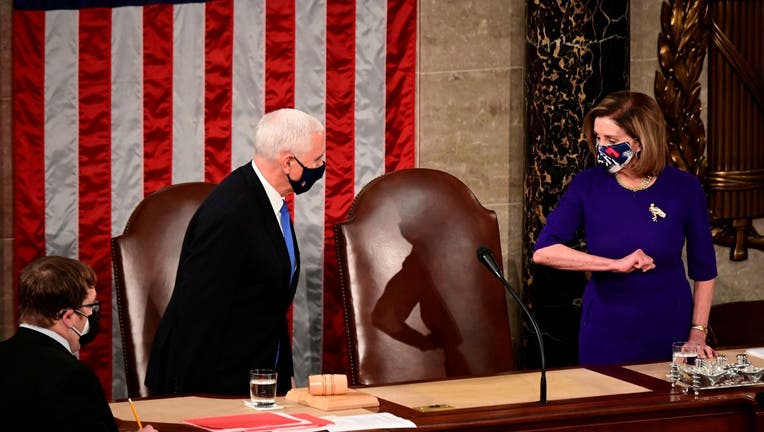 House Speaker Nancy Pelosi, a Democrat from California, greets Vice President Mike Pence while wearing protective masks during a joint session of Congress to certify Joe Biden as the next US president in the US capitol in Washington, DC, January 6, 2

WASHINGTON - Vice President Mike Pence and House Speaker Nancy Pelosi concluded a trying and at times scary joint session of Congress with an elbow bump in the predawn hours of Thursday.

The two also had a brief conversation following the certification and they appeared to thank each other.

The certification, which is a formality in most election years, was poised to be delayed by objections from some Republican lawmakers to the results in a handful of battleground states.

READ MORE: US Capitol secured after being stormed by pro-Trump supporters

One day after chaos enveloped the Capitol Hill neighborhood,

However, after Congress began the process Wednesday, a group of Trump supporters breached the Capitol building, forcing some to shelter in place and others to be evacuated.

When Capitol police finally removed the rioters, Congress went back into session to continue the certification process. Senate Majority Leader Mitch McConnell and other lawmakers vowed they would not be "intimidated" by the rioters.

After objections to the results in Arizona and Pennsylvania were debated and defeated, Congress certified Biden’s win around 3:40 a.m. ET Thursday.

Pelosi and Pence have not always seen eye to eye and the small gesture was a leap from some tense exchanges between the Democrat and some Republicans, including last year’s State of the Union address when she ripped up her copy of President Trump’s remarks following his speech.