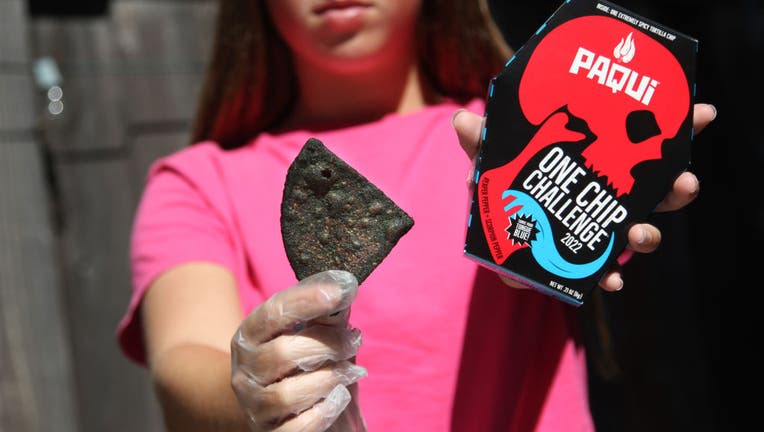 Dublin, CA - October 07: A recent social media trend has caused some children to vomit, sweat profusely and their tongues turn blue after participating in the One Chip Challenge. (Photo by Sarah Dussault/MediaNews Group/The Mercury News via Getty Ima (Getty Images)

EDINA, Minn. (FOX 9) - Several students at a middle school in Edina, Minnesota had to be treated by school staff and paramedics Friday after attempting the "One Chip Challenge," a social media trend in which participants film their reactions after eating an extremely spicy tortilla chip.

School officials at South View Middle School called an ambulance after several students complained of having difficulty breathing, while others had eye pain from exposure to the chip dust, according to an email sent by the school to parents.

The email said the paramedics who treated the students found no indication that any of them had any severe allergic reaction or injuries. None of them had to be taken to the hospital.

The challenge is a marketing campaign promoted by the Hershey-owned company Paqui that has been running for six years. Participants buy a chip made specifically for the promotion flavored with the Carolina Reaper pepper, considered the hottest pepper in the world, and then film themselves to document how long they can go without eating or drinking anything for relief.

This year’s version also includes flavoring from the scorpion pepper and ingredients that cause the consumer’s tongue to turn blue. The result: thousands of widely shared (and imitated) videos of people sticking out blue tongues while struggling to adapt to the spice level of the chip.

Paqui’s web page for the campaign includes a warning that the chip should be "kept out of the reach of children." However, viral TikTok challenges, including "One Chip," have long been popular among middle and high school students.

This year, schools across the country have reported students getting sick or going to the hospital after participating in the challenge, including in California, Georgia, Texas, Alabama and Colorado.

Side effects and treatment 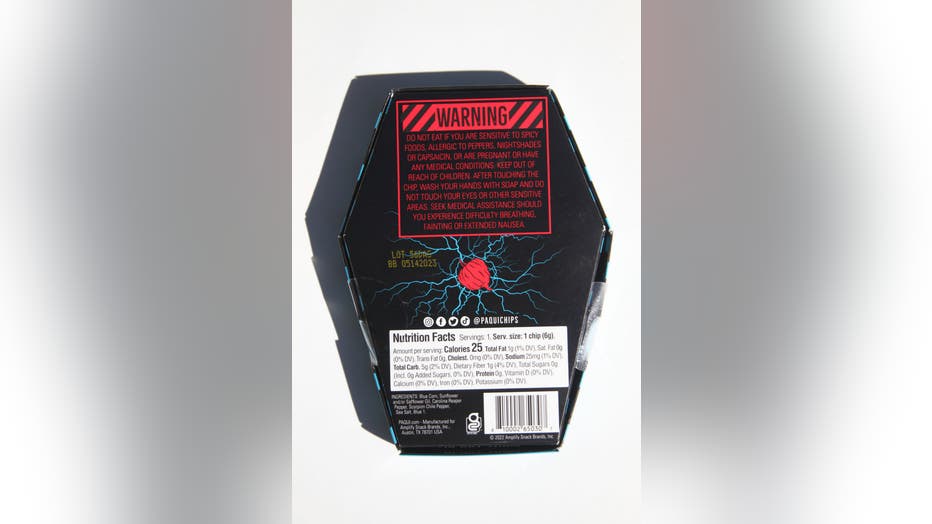 Dublin, CA - October 07: A recent social media trend has caused some children to vomit, sweat profusely and their tongues turn blue after participating in the One Chip Challenge. (Photo by Sarah Dussault/MediaNews Group/The Mercury News via Getty Ima (Getty Images)

Poison Control has a web page dedicated to the challenge, which explains that the ingredient in the chips causing some consumers distress is capsaicin, a compound found naturally in chili peppers. When eaten in high concentrations, capsaicin can cause anything from mild mouth and throat pain to intestinal and throat irritation, or even, in extreme cases, heart palpitations and heart attacks — though so far, there have been no reports of children having life-threatening reactions after participating in the challenge.

According to Poison Control, the best way to seek immediate relief after eating foods that contain capsaicin is by drinking milk. The agency also recommends people wash their hands thoroughly after eating the chips to avoid spreading capsaicin to their eyes. If capsaicin gets in your eyes, the agency recommends washing them out with room temperature water for 15-20 minutes.

Anyone with severe reactions should seek help from Poison Control via this webpage or by calling 1-800-222-1222.

"Students in possession of the Paqui chip, those who provide the chip to others, and those who participate in the chip challenge while on school grounds, on buses," or at school-sponsored events "will face disciplinary action," the district's statement read.

Edina Public Schools has taken a similar stance. The student who brought the chip to school on Friday was "disciplined according to district policy." Any student who participates in the challenge on school property can expect the same, according to the email sent to parents.