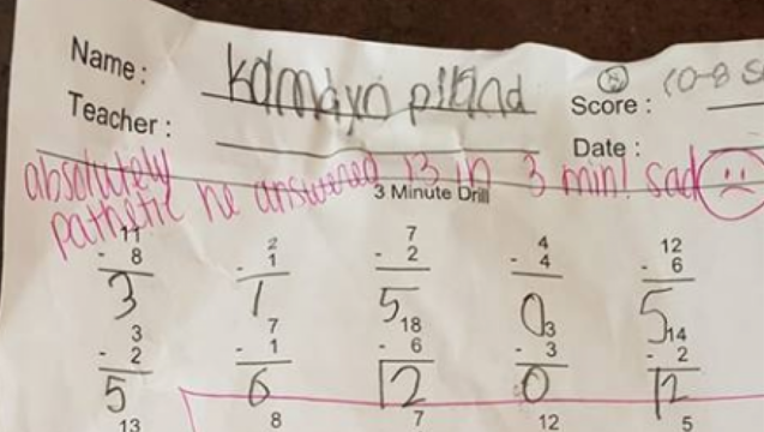 A Pennsylvania father shared an image of his son's math assignment with harsh comments written on top. (Facebook/Chris R Piland)

(FOX NEWS) - A viral image of harsh feedback written on a second grader's math assignment has prompted an online petition to fire his teacher.

Chris Piland, whose son attends Valley View Elementary School in Pennsylvania, posted an image on Facebook Tuesday of his son’s math assignment with remarks allegedly written by his teacher that read, “Absolutely pathetic. He answered 13 in 3 min! Sad.”

“My son Kamdyn’s teacher has been so rude to him and myself all year he comes home with this and I am beyond frustrated that someone would write this on a childs (sic) work such great motivation,” Piland wrote on the post.

The post went viral and prompted an online campaign to have the teacher fired. As of early Friday, the “Petition to fire Alyssa Rupp Bohenek from the Valley View school district” has garnered nearly 8,000 signatures and has been widely shared on Facebook.

Rose Minniti, the school superintendent, said an investigation was opened after a meeting the teacher and the Valley View School District but cautioned that the outcome would be dictated by “the facts and evidence” rather than “social media.”