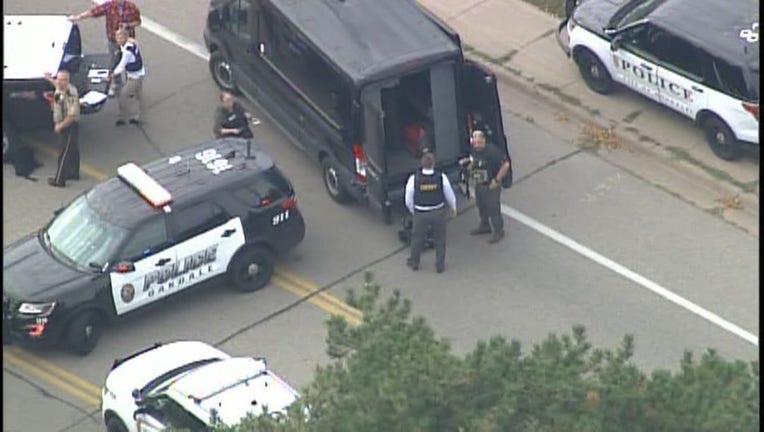 Authorities respond to an incident Monday afternoon in Oakdale, Minnesota.

OAKDALE, Minn. (FOX 9) - An Oakdale, Minnesota man is in custody after firing a gun toward officers during an incident Monday afternoon.

The Oakdale Police Department says they responded to a report of shots fired on the 900 block of Greenway Avenue Monday around 2:40 p.m. Once on scene they located a "person in crisis" they believed to be responsible for the gunshots.

Officers and negotiators began talking to the man on the third floor balcony from the parking lot. It was during the conversation the man pointed a gun out the window and fired towards police. Police returned fire and the man retreated into the apartment.

Eventually negotiators were able to get the man to surrender. He was taken to Regions hospital for minor injuries.

Police say the suspect could be charged after the investigation is completed.

As a result of the incident Tartan High School and Oakdale Elementary kept some students inside until the situation was resolved.

"There was an incident at a residence near Tartan High School during afternoon dismissal. The Tartan students who ride buses left safely on the buses. Any remaining Tartan students and staff were brought inside until approximately 4:50 pm when they were allowed to leave using safety measures in place. Oakdale Elementary was also affected and their dismissal was delayed for approximately 45 minutes."