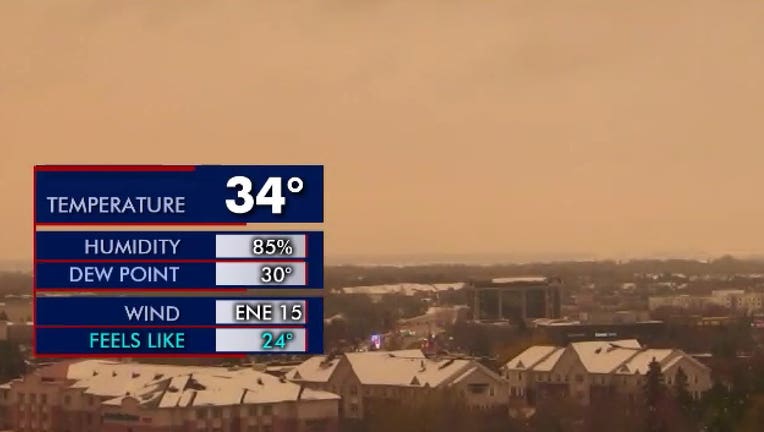 A combo of ice crystals in the atmosphere and smoke from the Colorado wildfires made for some strange colored skies in the Twin Cities Thursday. (FOX 9)

(FOX 9) - You may have noticed the sky has a strange tint to it today. That’s due to a combination of a large number of ice crystals in the atmosphere and smoke from wildfires in Colorado that has made its way to Minnesota.

Twin Cities could see a little bit of everything in terms of weather today from snow to sleet to thunder and lightning. On top of all that, the sky has looked weird, dark and almost orange at times.

It was sleeting in Eden Prairie, Minnesota Thursday. The metro is expected to get almost every kind of weather on Thursday from sleet to snow to thunder and lightning.

The strange colored skies are the result of two things. A large number of ice crystals in the atmosphere distort the color of the clouds and also block out the light, making the sky look darker.

Smoke from the Colorado wildfires has also made its way to southeastern Minnesota and western Wisconsin, which is also likely contributing to the strange color of the sky.

Get the FOX 9 Weather App to track winter weather live on your phone, with future radar, live streaming video of FOX 9 coverage and alerts and forecasts customized for your current location and favorite locations: fox9.com/apps.