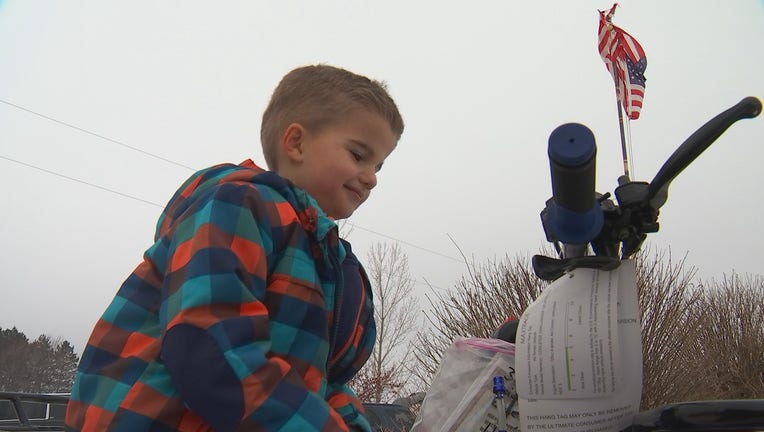 This boy was gifted an ATV for Christmas this year as part of an annual effort to help children affected by personal tragedies during the holidays. (FOX 9)

HINCKLEY, Minn. (FOX 9) - For the fourth straight year, Mac Johnston and his family knocked on the front doors of strangers’ homes on Christmas Eve, ready to surprise them with gifts big and small.

Each of the families the Johnstons visit are dealing with personal tragedies. Johnston spends weeks asking around for nominations, choosing gifts, and planning the logistics of the surprise.

It's the fourth year Mac Johnston and his family gave gifts to strangers facing personal tragedies on Christmas Eve.

It all comes together on Christmas Eve for Johnston. That’s when he and other family members pull up in front of an unsuspecting family’s home, delivering four-wheelers for the kids and gift cards for the parents.

“There’s no feeling like it, to see their reaction,” Johnston said. “Obviously we know we can’t help the situation that’s happening, but to give them some kind of joy is totally worth it.”

Johnston owns the East Central Sports dealership in North Branch, giving him access to the four-wheelers. His dad, friends and other local businesses contribute gifts to the surprise.

This year, the group first stopped at Jen Neel’s home near Pine City. Her husband, Ben, is a Pine County sheriff’s deputy and has been in a coma since mid-December after a seven-and-a-half hour surgery to remove a tumor in his head.

Jen Neel has been making trips to the hospital in the Twin Cities to see her husband. She brought her young sons to see their father this week.

The boys, 7-year-old Gabriel and 6-year-old Hunter, rode laps on their new four-wheelers with an older brother helping. Meanwhile, Jen Neel opened up gifts that included a locket with her husband’s photo inside.

The group then drove to Hinckley to see the Hagman family, which had lost its home and belongings in a November house fire.

At the sight of the four-wheeler, 7-year-old Madison wasn’t sure what to do at first. But she quickly warmed up to it and asked for a ride.

“I can’t wait ‘til next year,” Todd Johnston said. “Not for tragic stories, but to help out families that are having a tough time and a tough year.”