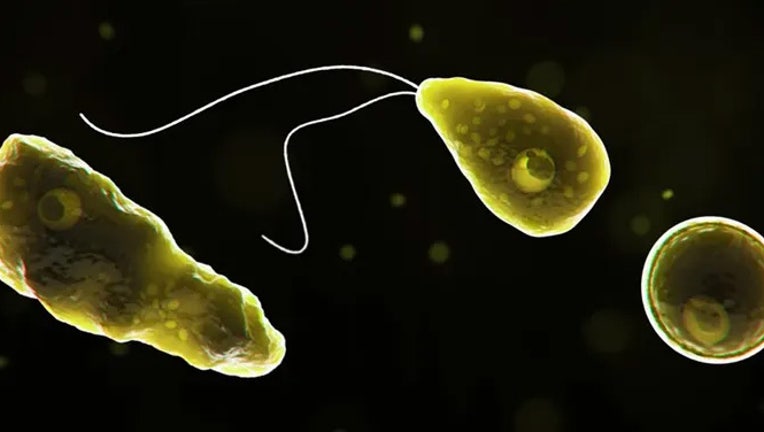 Naegleria fowleri is a free-living ameba that causes primary amebic meningoencephalitis (PAM), a disease of the central nervous system. (Missouri Department of Health and Senior Services)

BEDFORD, Iowa - A rare but deadly brain-eating amoeba has forced state officials to close an Iowa beach for swimming.

The precautionary beach closure at Lake of Three Fires State Park in Bedford, Iowa, is a response to a confirmed infection of Naegleria fowleri in a Missouri resident with recent potential exposure while swimming, the Iowa Department of Natural Resources said.

The infection is known as primary amebic meningoencephalitis (PAM). It is not contagious but can be life-threatening, health officials said. The microscopic single-celled free-living amoeba is commonly found in lakes, rivers and ponds.

The patient is being treated in an intensive care unit, according to the Missouri Department of Health and Senior Services. No additional suspected cases of PAM are currently being investigated in Missouri or Iowa.

This type of infection cannot be spread from one person to another, and it cannot be contracted by swallowing contaminated water, health officials said. It can occur when water containing the amoeba enters through the nose from freshwater. It then travels up the nose to the brain where it destroys brain tissue.

Infection typically occurs when people go swimming or diving in warm freshwater places, like lakes and rivers, according to the Centers for Disease Control and Prevention. In very rare instances, Naegleria infections may also occur when contaminated water from other sources, like inadequately chlorinated swimming pool water or heated and contaminated tap water, enters the nose. You cannot get infected from swallowing water contaminated with Naegleria.

Testing of the Iowa site, as well as an investigation of other potential locations, is still underway.

You can take actions to reduce the risk of infection by limiting the amount of water going up the nose. These actions could include: