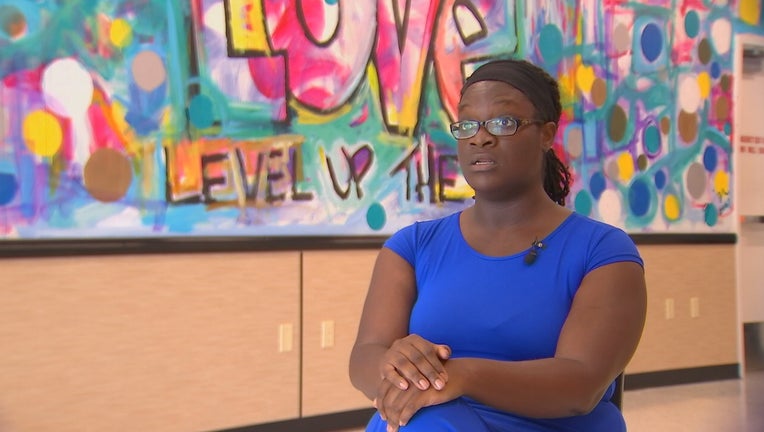 Mercedes Thomas-Foster recounts the moments as bullets flew past her and her children in Minneapolis. (FOX 9)

MINNEAPOLIS (FOX 9) - A north Minneapolis woman dove to the ground to protect her baby Monday night when the family got caught in the middle of shots being fired.

Mercedes Thomas-Foster and her family were just heading to a bus stop when they started hearing gunshots at Lyndale and Broadway avenues.

Minneapolis mom speaks out against violence after shielding baby from gunfire

A Minneapolis mother is speaking out against gun violence on the north side after a recent incident left her shielding her baby near a bus stop.

Thomas-Foster was with her seven-month-old baby with her husband a bit behind them with their two and three-year-old boys. She was about to run to him but suddenly she says there was divine intervention.

"When God told me to stop and drop that’s what I did because had I went anywhere I would have gotten hit," said Thomas-Foster.

With her baby tucked underneath, she waited for the shots to stop.

"I laid on the ground, I put my body over my seven-month-old daughter and I looked across the parking lot at my husband trying to figure out what to do with our two sons because they’re in a stroller," she recalled.

But finally, she heard silence.

"I took a look around and there were bullet shells surrounding me and my daughter," she said.

Some might be terrified to speak out to take on the shooters but not Thomas-Foster.

"How about this: be mature enough and have a conversation. No, I’m not scared, want to know why? Because instead of shooting a gun or fighting, I know how to talk. I know how to have a civilized conversation, you understand, even when I’m hurting."