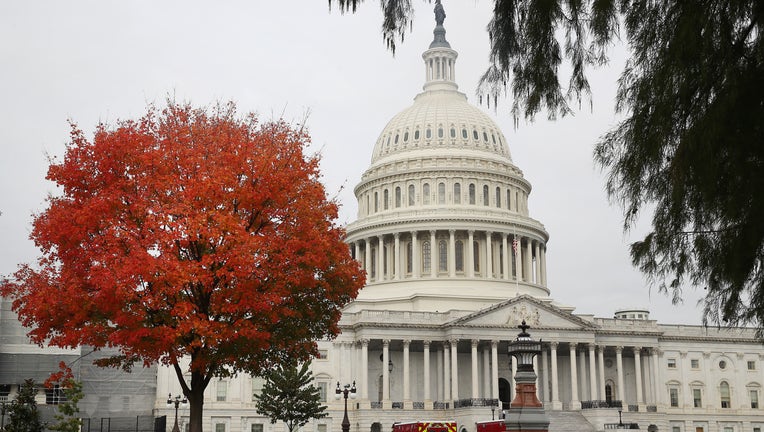 WASHINGTON, DC - OCTOBER 30: Fall foliage is on display in front of the U.S. Capitol on October 30, 2019 in Washington, DC. (Mark Wilson/Getty Images)

The resolution passed, 232-196, paving the way for public hearings on Trump’s dealings with Ukraine. To date, House Democrats have been holding closed-door depositions of key witnesses, leading Republicans to protest the process.

A divided&nbsp;U.S. House of Representatives voted along party lines Thursday to move forward with the impeachment investigation against President Donald Trump.&nbsp;

Two Democrats, including U.S. Rep. Collin Peterson of Minnesota, joined Republicans in voting against Thursday’s resolution. In a statement, Peterson said he would not make a decision on whether to ultimately impeach the president until the investigation was over. He called the vote “unnecessary.”

“This impeachment process continues to be hopelessly partisan,” Peterson said. “I have some serious concerns with the way the closed-door depositions were run, and am skeptical that we will have a process that is open, transparent and fair. Without support from Senate Republicans, going down this path is a mistake.”

Peterson represents a western Minnesota district that voted for Trump by 31 points in 2016. The congressman narrowly won his re-election bid in 2018.

“The sole remedy to protect our democracy and citizens from an abusive, dangerous, and corrupt president is impeachment, and we are formally on a path toward impeaching Donald Trump,” McCollum said in an email.

House Democratic leaders are drawing the closed-door portion of the impeachment inquiry to an end. The investigation will transition to open hearings, where witnesses will testify in public and Trump’s lawyers will be allowed to cross-examine them.

House committees have been conducting closed-door depositions of key witnesses for weeks. Democrats and Republicans on those committees are allowed to participate, but Republicans have complained that the process has been secretive and unfair.

“The resolution offered by the Democrats today was a public relations charade to try to validate their closed, one-sided and partisan impeachment exercise,” Hagedorn said in an email.

Last week, the top U.S. diplomat in Ukraine said in his deposition that Trump had pressured Ukraine for political favors in exchange for a White House meeting and U.S. military aid. On Tuesday, the National Security Council’s Ukraine expert told lawmakers that the White House had altered parts of a rough transcript of Trump’s July phone call with Ukraine’s leader.

Democrats want the transition to open hearings to happen quickly, because they are trying to hold a final vote on impeachment before the 2020 campaign gets into full swing.

Democratic leaders have not announced a timeline for releasing transcripts of the depositions, a hearing schedule, or when they plan to hold votes on articles of impeachment.

In an interview with FOX 9, Craig said she will not decide whether to vote to impeach the president until seeing more evidence.

“Today’s vote is really about process. It’s about making sure that Democrats and Republicans have equal time and have the opportunity to interview folks in public,” Craig said.