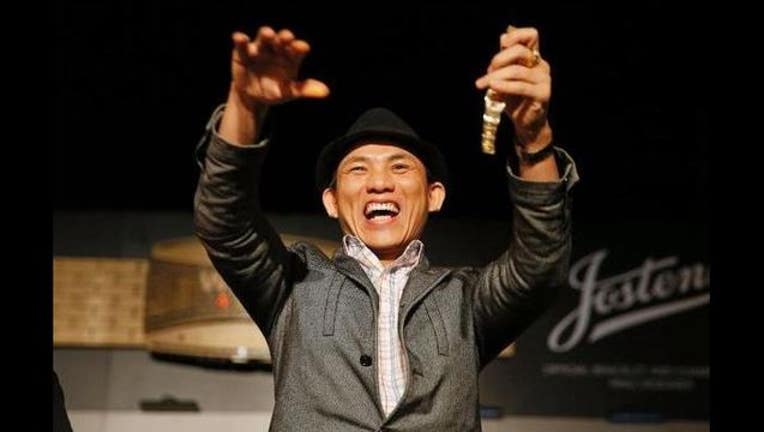 LAS VEGAS (AP) -- It's one thing to outlast hundreds or thousands of poker players to win one of the World Series of Poker's 68 events and the Las Vegas tournament's coveted gold bracelet.

It's another thing entirely to win a game you've never played before.

Christian Pham of St. Paul, Minnesota, did exactly that Thursday, rising to the top of 219 players, including a few poker icons. By accident.

The 40-year-old professional poker player said he intended to play no-limit Texas Hold `em but instead inadvertently signed up for a different game happening the same day: so-called no-limit deuce-to-seven draw lowball. The cost? A $1,500 buy-in.

Essentially, the goal is to have the lowest poker hand, no straights or flushes, and if a player ends up with a pair, it's better if it's a pair of twos. Players can also draw cards.

The event was just one of 68, all offering a chance at a golden bracelet prize, happening in Las Vegas at the Rio All-Suite Hotel & Casino throughout the 51-day World Series of Poker that started on May 27 and culminates with the closely watched Main Event.

Pham said he didn't realize his mistake until he was dealt five cards instead of the usual two. He panicked, then observed, leaning on helpful players who advised him what beat what.

"At first you suspect an act, but if it was, it was very good," said Chris Mecklin who was sitting next to Pham when the game's newbie realized he had made a mistake. He didn't know it would be a fortuitous one.

Mecklin said it became clear that Pham was an experienced player, just not in this game. When he won a hand with the best set of cards one can get in the game -- a two, three, four, five and seven -- he said Pham seemed confused that he happened to be holding the most desired combination of cards.

The next day, Mecklin signed into WSOP.com to check on the game's results.

"Imagine my surprise when I see the photo of the chip leader!" he said in an email.

Pham said the guidance from his fellow players at the table helped, and he studied up the night in between. In the end, he said it was his tournament acumen for when and how much to bet and manage his chips that got him to the top.

On Friday, he was $81,314 richer and held up his gold bracelet, the tournament's version of a Super Bowl ring, and stood on stage as tournament organizers and players stood for the playing of Vietnam's national anthem. Every winner of the tournament's 68 events gets to hear his or her anthem of choice.

Pham moved 15 years ago from Vietnam to Minnesota, where he delivered newspapers. He played his first cash poker game in 2008 and later won second place in a local tournament along with several thousand dollars.

Then he won a $200 satellite tournament in 2014 that sent him to Caesars Palace in Las Vegas for the World Series of Poker's circuit main event where he won the gold ring and $214,332.

"After that, I thought this game might be very good to me," he said.