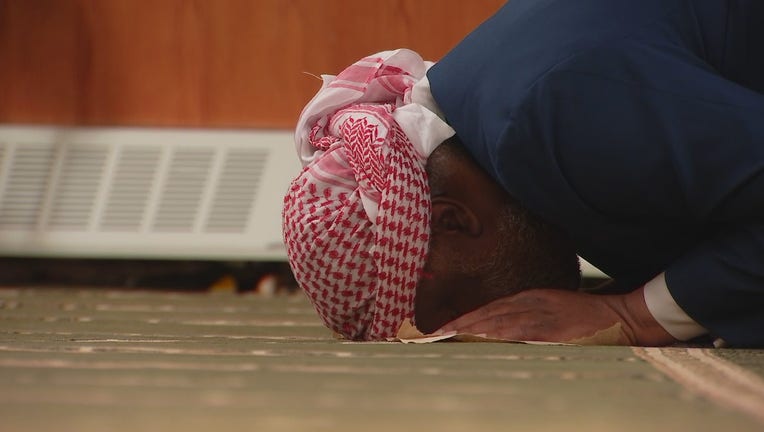 An Imam in St. Paul prays alone after making the tough decision to keep his Islamic Center closed despite a new executive order.

(FOX 9) - Places of Worship are getting ready to slowly start welcoming people back through their doors.

Gov. Tim Walz and faith leaders struck an agreement Saturday allowing churches, synagogues and mosques to open in some capacity later this week.

Places of Worship are getting ready to slowly start welcoming people back through their doors, but some say they still aren't ready.

The agreement with the Governor allows churches and other places of worship to hold events at 25 percent capacity starting Wednesday, but many faith leaders say they don’t expect things to immediately return to normal.

“Although it’s difficult, our priority is to save lives,” said Imam Hassan Ali Mohamud, of the Islami Da’wah Center.

Mohamud prayed alone at the St. Paul Islamic center on the second day of Eid, the Muslim holiday that celebrates the end of Ramadan. Normally, this time of year is filled with celebration in mosques across the state.

“One verse of the Qaran says saving one single life of humanity is saving the whole world,” he said. “So, coming from that perspective, all of these decisions and orders are meant to save lives.”

That’s why, he says, his mosque has made the decision to hold off on any in-person worship even after they’re allowed to with restrictions starting Wednesday.

“At this time we are taking the approach is more consultation and religious leaders, Imams, are consulting with the health professionals,” Mohamud said.

A cautious reopening is also happening at Christ Presbyterian Church in Edina.

“We hope to resume some smaller activities on our campus in the next few weeks,” said Executive Pastor Petey Crowder of Christ Presbyterian Church.

Crowder says they won’t start holding Sunday services right away, but the ruling from the Governor allows for more guests at weddings and funerals.

“We will probably encourage people to wear masks,” Crowder said. “We’ll also encourage social distancing. We’ll spread people out in pews when we can, but again, a lot of that might be a while down the road for us.”

While large events are not on the calendar yet, the church is thinking about how to strategically prepare the building and its employees to be as safe as possible when they do resume events.

Some faith leaders, like those at Beth El Synagogue in St. Louis Park continue holding off on services altogether.

“Jewish worship is far more about the communal gathering,” said Rabbi Avi Olitzky of Beth El Synagogue. “It’s not a come in and get out. It’s not come in and sit down and pray and leave. It really is about coming together as a community and the social distancing and the setting we would have to do that would probably take away from the experience far more than enhance the experience.

Olitzky said he believes the majority of his congregation is not clamoring for in-person services right now and that the majority supports the decision to hold off on services.

While the change is happening, the Mayors of Minneapolis and St. Paul sent out a letter saying they’ve talked with faith leaders in their cities and are planning to hold only remote services for now.