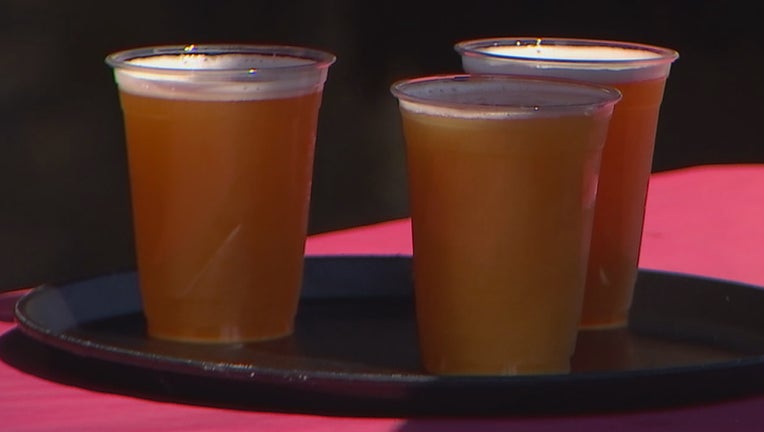 The future of craft breweries remains uncertain as winter approaches amid the COVID-19 pandemic.

ST. PAUL, Minn. (FOX 9) - Minnesota breweries already struggling financially due to the pandemic are preparing for their next big challenge: surviving through the slower winter season.

For the owners at Urban Growler Brewing Company in St. Paul, adapting has become a theme in 2020. Spaced out seating expanded to the parking lot and contactless order pickup are familiar sights at the brewery amid the COVID-19 pandemic.

Minnesota breweries brace for winter season, can shortage amid brutal 2020

Minnesota breweries already struggling financially due to the pandemic are preparing for their next big challenge: surviving through the slower, winter season.

“I keep saying, ‘We are keeping you physically distant, so you can safely socialize,’” said Jill Pavlak, a co-owner of Urban Growler.

“We’ve done a lot of things, we changed our business model pretty much overnight and we are strategizing how to go through the winter, which will be extra challenging,” said Deb Loch, a co-owner of Urban Growler.

Since the pandemic hit, Loch says sales are down 40 percent at Urban Growler. The brewery, which also serves food on-site, turned to take-out business amid the months they were closed due to the governor’s executive order. Now reopened, capacity levels remain restricted in order to maintain safe levels for social distancing.

“It has been a rough year; it has been quite honestly, very brutal,” said Loch.

They are not alone. This week, Surly Brewing released a statement saying revenue at its beer hall in Minneapolis is down 82 percent compared to last year. The brewery announced the beer hall will be closing indefinitely in November.

Lauren Bennett McGinty, the executive director of the Minnesota Craft Brewers Guild, says a recent survey of its members showed about 90 percent have reduced their production this year. She says breweries statewide are stretched thin as many had to cut staff, and breweries may not have the extra dollars to lengthen their patio season.

“They don’t necessarily have enough extra cash to spend on things like patio heaters because we’re hearty in Minnesota; we like to go outside no matter what, but I think to some extent you’re only going to get so many people who are willing to sit outside when it's 10 degrees out,” said Bennett McGinty.

For some breweries, staying afloat means a change in strategy.

“With that consumer confidence comes with a lack of those on-premise sales, so breweries are trying everything they can to keep growlers going - or the crowlers - some have entered distribution for the first time,” said Bennett McGinty.

The problem? Aluminum cans are now in short supply. Loch says she just received a shipment of cans she had been trying to get since April.

“So that’s a challenge especially for smaller breweries. We’re at the bottom of the feeding chain and a lot of cans are going to the bigger breweries,” said Loch.

At Urban Growler, Loch and Pavlak say they’re trying to stay creative for the winter by coming up with ways to use their event space and putting out a range of seasonal varieties. Moving forward, they say it's the support from the community that will pull them through.

“We’re not made of money, we’re doing this because we love what we do and just got to get through this together,” said Pavlak.