People packed bars and restaurants at the Lake of the Ozarks in Missouri, a vacation spot popular with Chicagoans. Video shows people at Backwater Jacks Tiki Bar, which held a pool party on May 23.

Crowds flocked to newly reopened beaches, pools and patios over Memorial Day weekend across the U.S. amid warnings from authorities to maintain safe social distancing guidelines or possibly risk a resurgence of the virus that has killed nearly 100,000 Americans.

Dr. Deborah Birx, coordinator of the White House coronavirus task force, said she was “very concerned” about scenes of people crowding together over the weekend.

“We really want to be clear all the time that social distancing is absolutely critical. And if you can’t social distance and you’re outside, you must wear a mask,” Birx said Sunday on ABC’s “This Week.”

On the Navajo Nation, which sprawls across the states of Arizona, New Mexico and Utah, the number of virus cases rose by 56 on Sunday to 4,689, according to the local health department.

In Missouri, people packed bars and restaurants at the Lake of the Ozarks, a vacation spot popular with Chicagoans. One video showed a large pool party Saturday at Backwater Jacks Tiki Bar, which said in a post on Facebook that “extra precautions and safety measures” were in place for the weekend.

In Florida, aerial video on Sunday showed a massive crowd gathered in Daytona Beach, holding up traffic on a major roadway. Photos showed throngs of beachgoers in Cocoa Beach with towels and umbrellas set up next to one another. The number of the state’s confirmed cases rose by 740 over the weekend as more people have been tested, bringing the total number of cases in Florida to nearly 51,000, as of Sunday. 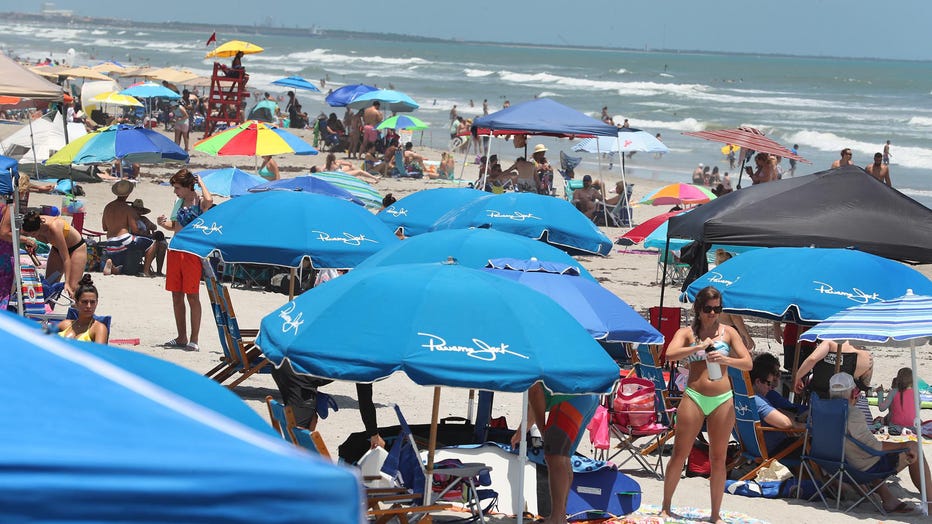 Cocoa Beach is packed with Memorial Day weekend beachgoers on Saturday, May 23, 2020, in Cocoa Beach, Fla. The beaches are open for business again during the coronavirus pandemic. (Stephen M. Dowell/Orlando Sentinel/Tribune News Service via Getty Ima

On Georgia’s Tybee Island, the beach was filled with families, but at a nearby grocery store, staff members handed customers gloves and a number to keep track of how many people were inside.

In California, beaches and parks were open for swimming, running and other activities.

At New York’s Orchard Beach in the Bronx, kids played with toys, and people sat in folding chairs. Some wore winter coats on a cool and breezy day, and many wore masks and sat apart from others.

“Good to be outside. Fresh air. Just good to enjoy the outdoors,” said Danovan Clacken, whose face was covered.

The U.S. is on track to surpass 100,000 coronavirus deaths in the next few days, while Europe has seen over 169,000 dead, according to a tally by Johns Hopkins University that almost certainly understates the toll.

Worldwide, more than 5.4 million people have been infected and nearly 345,000 have died.

“I again remind everyone that the coronavirus is not yet contained,” Food and Drug Administration Commissioner Stephen Hahn said Sunday on Twitter. “It is up to every individual to protect themselves and their community. Social distancing, hand washing and wearing masks protect us all.”

The issue of wearing masks in public and staying several feet apart has become fraught politically, with some Americans arguing that such rules violate their rights.

Republican Gov. Mike DeWine of Ohio, who has been targeted by such demonstrations, insisted the precautions should not be a partisan issue.

“This is not about whether you are liberal or conservative, left or right, Republican or Democrat,” he said on NBC’s “Meet the Press.”

Meanwhile, the Trump administration said Sunday that it would ban foreign nationals who have been in Brazil 14 days or less before planning to enter the United States. The ban does not apply to U.S. citizens or legal permanent residents or some of their relatives.

Brazil is second only to the U.S. in reported coronavirus cases.

This story was reported form Cincinnati. The Associated Press contributed.