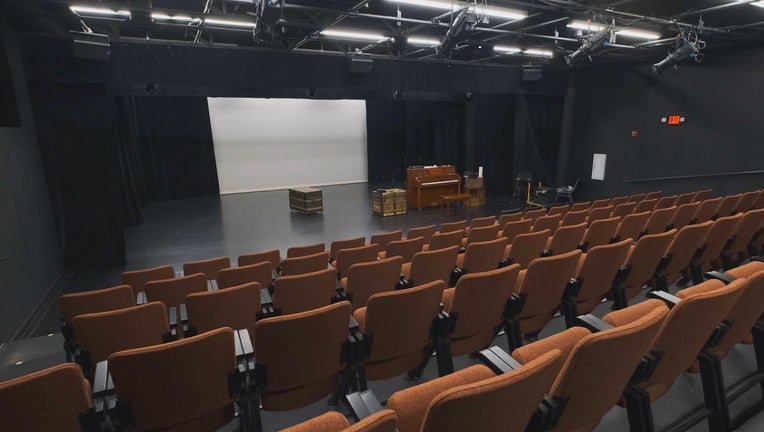 The Elision Playhouse like other venues across the country and world was forced to close due to the pandemic but is now getting ready to reopen. (FOX 9)

MINNEAPOLIS (FOX 9) - Congress passed the Save Our Stages Act to give $16 billion to independent clubs and theaters across the country affected by the pandemic. But more than six months later, many of them are still waiting to see any money.

Now, some members of Congress are asking the Small Business Administration to explain why it’s taking so long for many shuttered venues to get help.

Congress passed the Save Our Stages Act to give $16 billion to independent clubs and theaters across the country affected by the pandemic. But more than six months later, many of them are still waiting to see any money.

"We do shows that are very woman-forward," said building manager Christine Waid with the Elision Playhouse. "They are chamber musicals which means we focus a lot on the music."

For the last 15 months, the stage at the Elision Playhouse in Crystal has been dark. But, Waid says the theater will re-open its doors in a couple of weeks, thanks in part to a little help from the federal government.

"It's surreal," Waid said. "We've been in rehearsals for about a week and it kind of feels like I can't believe we are here together doing this."

The Playhouse opened in July of 2019 and put on four shows before it was forced to close eight months later because of the pandemic. But bills like utilities, mortgage and property taxes kept piling up even though the theater wasn't bringing in any revenue.

"It's hard because we only opened in 2019; that wasn't a long time and we were just feeling like we were getting going and getting some momentum, and it was just a stop," said Waid.

The Playhouse applied for the shuttered venue operators grant program, which Congress approved in December to give billions in emergency assistance to independent venues unable to operate because of COVID-19. But the program run by the Small Business Administration has been troubled by technical glitches and ongoing delays with only about 500 grants out of 14,000 applications approved so far.

Waid says Elision is one of only a handful of shuttered venues in Minnesota to hear their grant received a green light. She says the $25,000 won't cover all the losses from being closed for more than a year but every bit helps.

"It's exciting and I hope it means the doors are opening for a lot of other venues too soon," said Waid.