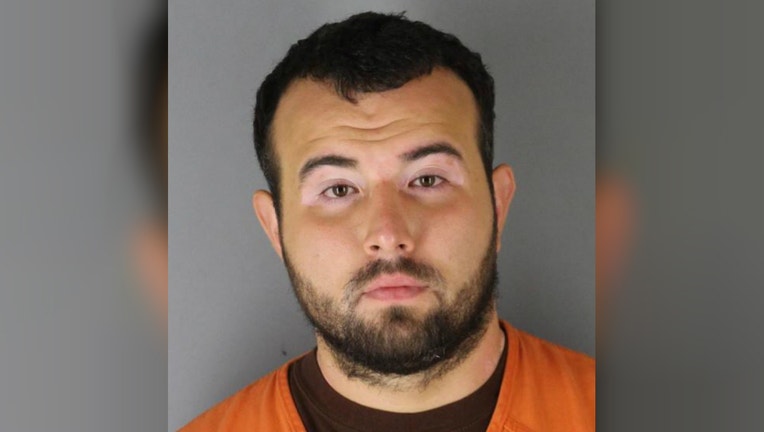 Erik Kravchuk is charged after he allegedly head-butted a man, who later died from his injuries.

MINNEAPOLIS (FOX 9) - A Golden Valley, Minnesota man is charged with first-degree manslaughter after a man he allegedly head-butt in a downtown Minneapolis bar died from his injuries, according to a criminal complaint.

According the criminal complaint, July 29 around 4 p.m. Minneapolis police responded to Hennepin County Medical Center, where a man, 42-year-old Aleksandre Sambelashvili, was admitted for a possible head injury. Sambelashvili's friend told police they had been at a bar at the Lumber Exchange Center in Minneapolis when the alleged assault happened.

Surveillance video from the bar on July 28 at 1:36 a.m. showed Sambelashvili walk toward a man, later identified as Kravchuk, who then "suddenly and violently" head-butted him. Sambelashvili appeared to become unconscious immediately and fell backward, hitting his head on the floor. Kravchuk walked away.

Leading up the head-butt, Sambelashvili did not appear to be aggressive and there was no sign of conflict between the two men.

Sambelashvili remained hospitalized at HCMC with a head injury until he died on August 23.

Police found Kravchuk and arrested him. In a police interview, Kravchuk told them he was at the bar on the night in question. After officers explained what happened, he asked to see the surveillance video. Kravchuk admitted it was him in the footage of him entering the bar and signing the credit card receipt. When the officers showed Kravchuk the video of the head-butt, he said he did not know the victim and refused to say it was him in the footage. Once police told Kravchuk the man died from the assault, Kravchuk asked for an attorney and the interview ended.

Kravchuk is in custody.

When Kravchuk makes his first appearance in court, prosecutors will be seeking $500,000 in bail.