WASHINGTON - Participants in inauguration rehearsals at the U.S. Capitol were briefly ordered to 'shelter in place' Monday by officials after a fire several blocks away triggered a security alert.

FOX 5's Tom Fitzgerald explains how a small fire nearly a mile away from the Capitol led to a lockdown in the building amid rehearsal for Wednesday's inaugural ceremonies.

The evacuation happened around 10:30 a.m. and was not believed to be a threat to the Capitol complex.

Washington D.C. Fire and EMS confirmed that there was a fire at a homeless camp at the 100 Block of H St SE, which was extinguished, according to FOX News.

RELATED: Several arrests made near security checkpoints in DC ahead of inauguration 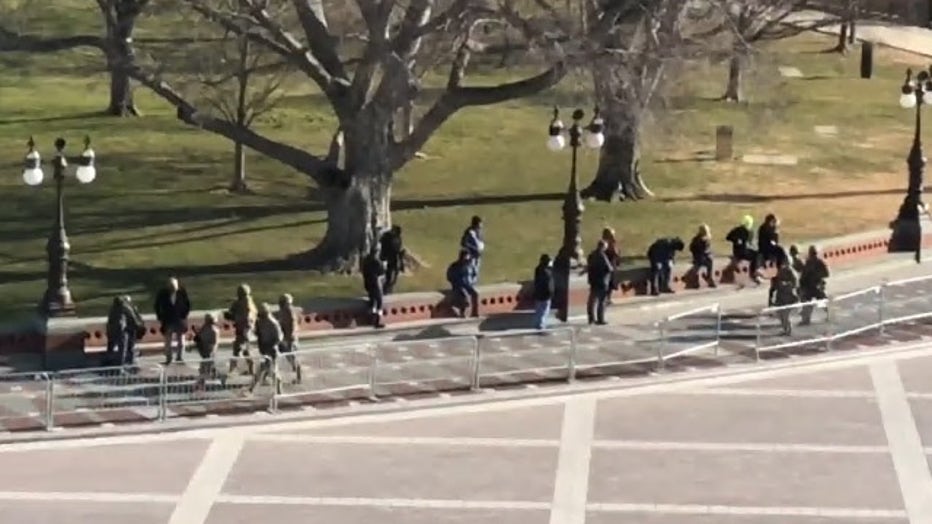 DC Fire officials tell FOX 5 a woman who was living in the camp suffered minor injuries, but refused medical treatment. She is being assisted by the American Red Cross. DC Fire & EMS were able to put out the fire.

"That was something that we were able to very very quickly but the reports of a possible explosion were apparently the result of a fact that this individual had among their possessions a Coleman heater so there was a canister with some flammable gas in it which exploded from the heat from the fire," says Vito Maggiolo from DC Fire & EMS.

The scare comes in the wake of a security threat unlike anything D.C. has seen since 9/11.

"There’s never been any security like this for a presidential inauguration," says Robert McCartney of the Washington Post. "As far as I can tell, this is more secure now than when Abraham Lincoln was inaugurated twice during a civil war."

"In an abundance of caution following an external security threat under the bridge on I-295 at First and F Streets, SE, Acting Chief Pittman ordered a shutdown of the Capitol Complex. There are currently no fires on or within the Capitol campus. Members and staff were advised to shelter in place while the incident is being investigated. As more information becomes available, this message will be updated."

The security scare came as U.S. defense officials say they are worried about an insider attack or other threat from service members involved in securing President-elect Joe Biden’s inauguration.

The District has beefed up security in and around downtown Washington, D.C. ahead of the inauguration due to concerns that have gripped the nation’s capital following the deadly Jan. 6 insurrection by pro-Trump rioters.