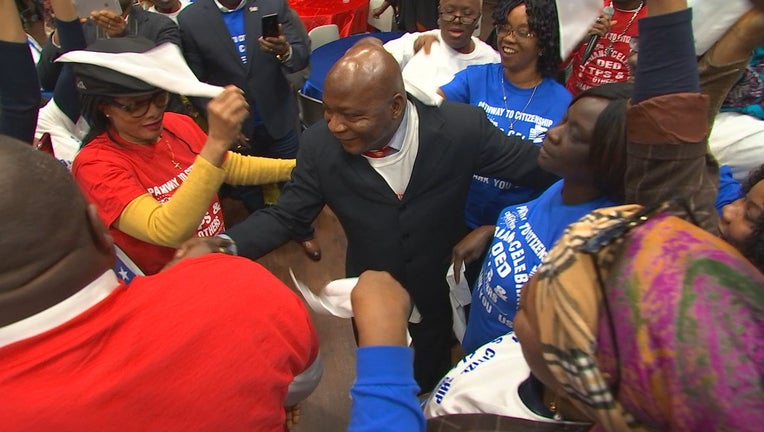 Liberians dance in Brooklyn Center to celebrate their chance at getting a green card. (FOX 9)

BROOKLYN CENTER, Minn. (FOX 9) - It's been a long road, but Liberians around the country, including those in Minnesota, are seeing the light at the end of the tunnel.

A new law signed by the president at the end of last year gives many Liberians a chance to apply for their green card.

Liberians in Minnesota, who escaped turmoil in their home country, celebrate chance at green card

It's been a long road but Liberians around the country, including those in Minnesota, are seeing the light at the end of the tunnel.

Saturday, Liberians gathered in Brooklyn Center for a celebration. The city and surrounding communities are home to the largest population of Liberians outside of Liberia.

Many had to leave their country because of civil war, but they were never really sure how long they’d be able to stay in the U.S. Now, it looks like that answer is a lot clearer.

"The community prayed and prayed for reprieve, and this reprieve has come," said Brooklyn Center Mayor Mike Elliott.

Liberians in the Twin Cities are giving thanks for the signature of the president in December when the Liberian Refugee Immigration Fairness Act was signed into law and opened a path to citizenship for Liberians.

"There’s been war in my country," explained Annie Yonly. "So many wars, I don’t know how to name them, so many."

Yonly came to the U.S. in the 80s for school but knows many who came to escape war. The new law says all Liberian nationals who have lived in the U.S. since November 20, 2014 are now eligible for green cards.

"I don’t know how to describe it," said Yonly. "I’ve been so happy since then. It’s very, very emotional for me."

That means the possibility of going back to Liberia to visit family they haven’t seen in decades and lifts the weight of deportation from the U.S.

"It iakes a lot of worry away from these families who are part of the community," explained Mayor Elliott.

There are certain conditions to meet in order to get a green card including paperwork and a fee of about $1,200 that must be paid. As of December 20, 2019, Liberians have one year to apply and they were told Saturday: Don’t procrastinate.