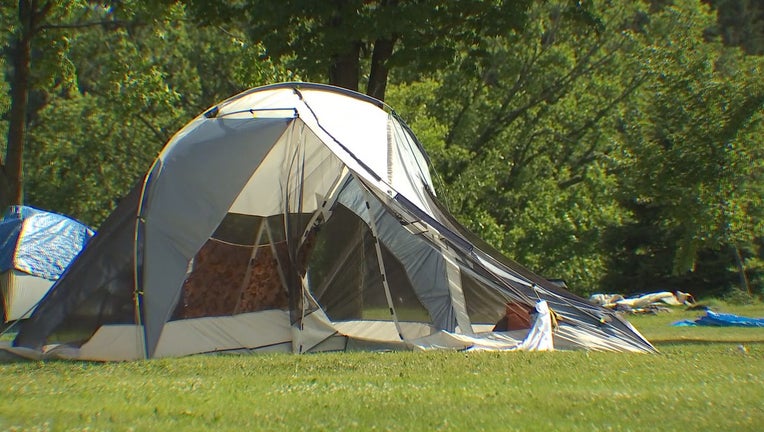 MINNEAPOLIS (FOX 9) - A homeless encampment in Powderhorn Park is dwindling after the park board passes a resolution to reduce the number of tents.

People living in the park received vacate notices over the weekend. However, for some neighbors, the impact of the encampment at the park has already been felt.

A homeless encampment in Powderhorn Park is dwindling after the park board passes a resolution to reduce the number of tents.

Sawyer owns a 17-unit apartment building on the edge of Powderhorn Park. He says in the last month, they’ve found used syringes and stolen cars in the building’s parking lot, and at least two tenants have notified him that they’ll be moving.

"Yesterday, one of the residents reported that someone was breaking into the mail room and stealing packages," he explained. “The residents don’t feel safe and that’s the primary concern here.”

He blames an increase in crime on the tent encampment that popped up in the park a month or so ago. Friday, he filed a lawsuit against the park board because he says they weren’t doing anything about the encampment.

"If people are living in our parks, there’s other things that went wrong," said Minneapolis Park Board Commissioner Londel French. "So it’s not about whether park officials are allowing folks to live in our parks. We need other agencies, other bodies of government to step up.”

French was at the encampment several times Sunday where it was obvious many people had already left. The park board has given notice to everyone living on the east side of the encampment that they need to vacate by Monday.

"My goal is before tonight’s over is to have everyone in a different place," said French. “It may not be a sheltered place but it will be a place to go.”

French says for those who do not want to or can’t go to a shelter, they’re offering transportation to other parks. But Sawyer worries there will be some who refuse to leave.

"Some people have already been leaving the camps but what I’m afraid of is that what we have left is the bad elements," said Sawyer.