The Middle Island sinkhole in Lake Huron, a few miles off the Alpena coast and 100 feet down, is a perfect simulation for what early earth was like, more than 4 billion years ago.

Scientists tested a new theory about the gradual increase in oxygen over billions of years on the planet in a sinkhole in the Great Lakes, discovering a previously unconsidered link between the length of daylight and the planet's supply of breathable air.

A study of the microbes that live at the bottom of the lake has concluded that the increasing amount of sun led to organisms creating more oxygen, which kickstarted an evolution of biology 4 billion years ago.

Scientists published their results in August.

"On a very ancient Earth, there was very little oxygen," said Brian Arbic, a physical oceanographer at the University of Michigan. "Then there was this jump that (created) enough oxygen in the atmosphere for animal life including for ourselves to evolve."

It was a slow-moving jump, though, taking place over the majority of Earth's existence.

"More than 4 billion years ago, days might have been as short as six hours. Like complete cycle including night and day," said Judith Klatt, the lead author on the study. "At this point, there was probably no life on Earth."

Klatt, who works at the Max Planck Institute for Marine Microbiology, theorizes the first domino to fall in the eventual creation of life was when Earth's rotation slowed down.

Days grew longer, which enabled what few organisms already existed on the planet to start building on the growing abundance of sunlight.

"There was a stunning similarity between the pattern of Earth's oxygenation and its rotation rate," said Klatt. "Many people have actually seen that, but I think the question is where is the link and we think the link is in the oxygen release from so-called microbial mats."

Residents of the Great Lakes are likely familiar with these mats, even if they don't realize it. They're also known as cyanobacteria - the main culprit behind the algal blooms that cover surface waters in Lake Erie and coastlines in Lakes Michigan and Huron.

But before they were contaminating Michigan's surrounding water, they competed for light at the bottom of water bodies. Arbic said researchers found some of these microbes at the bottom of the Middle Island Sinkhole, a few miles off the coast of Alpena and about a hundred feet down. 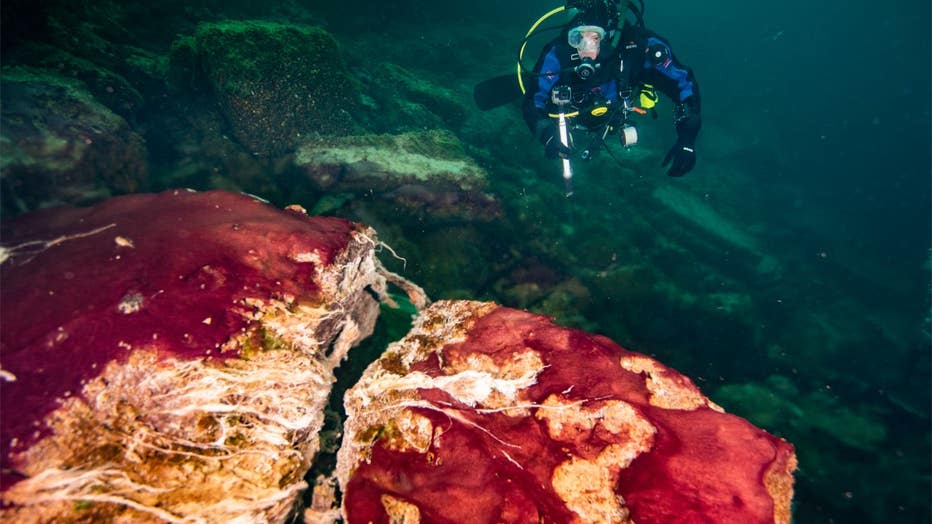 There, a microscopic battle between two kinds of bacterias - oxygen-producing cyanobacteria and white sulfur-oxidizing bacteria - would play out, scientists say.

The study involved researchers from the U-M, Grand Valley University, and other scientific labs.

"We look at the sinkhole ecosystem at these microbial mats as a window into the ancient oceans," said Klatt. "It provides a glimpse into how life might have been a few billion years ago."

Scientists say the theory, if true, could have implications well beyond Earth's own development. It could tell the story of how life develops on other planets.

"…if we're right about this, then tides affecting planetary rotation, rotation affecting photosynthesis - it's something that could happen elsewhere," said Arbic. 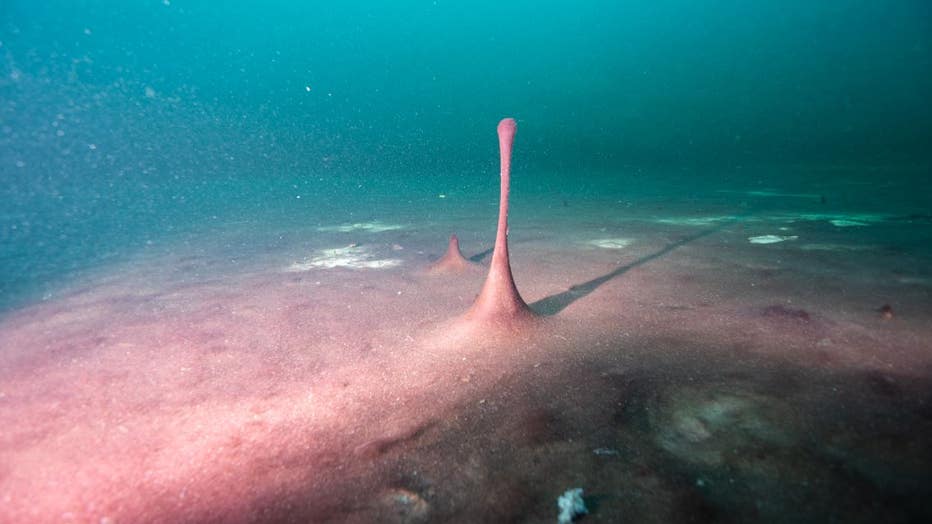 Purple microbial mats in the Middle Island Sinkhole in Lake Huron, June 2019. Small hills and "fingers" like this one in the mats are caused by gases like methane and hydrogen sulfide bubbling up beneath them. Photo credit: Phil Hartmeyer, NOAA Thund