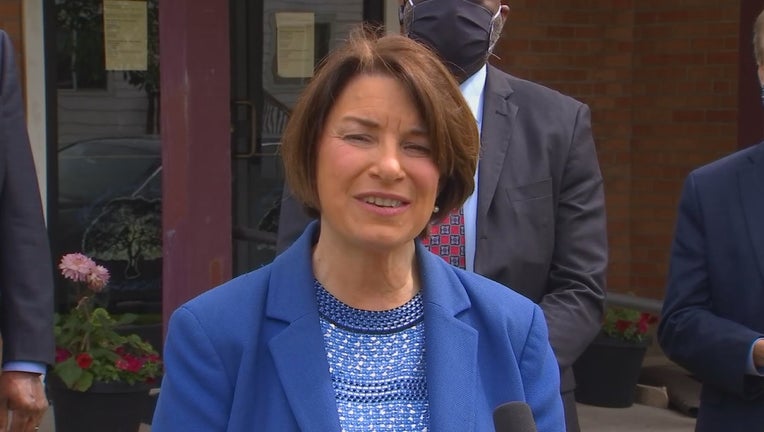 MINNEAPOLIS (FOX 9) - For Amy Klobuchar, the vice presidential speculation began the moment on March 2 when she ended her presidential campaign and endorsed Joe Biden.

For weeks, she was believed to be a top contender, even appearing on a Biden podcast. But the political landscape changed when George Floyd died in police custody in her home state.

For Amy Klobuchar, the vice presidential speculation began the moment on March 2 when she ended her presidential campaign and endorsed Joe Biden.

The riots and outcry for police reforms and social justice echoed from the very streets where Klobuchar once served as chief prosecutor.

Whatever political assets Klobuchar held before George Floyd, they had suddenly changed. So, she called Biden on Wednesday night to pull herself from consideration on the ticket.

She made the announcement Thursday night on MSNBC.

"And I truly believe, as I told the vice president last night when I called him, that I think this is a moment to put a woman of color on that ticket," she said.

Friday, at a news conference to promote voting by mail, she explained the sudden mobilization of people on the issue of racism and police relations is a moment that calls for a woman of color.

"He’s got great people to choose from and there are many, many qualified people," said Klobuchar. "But, I don’t think you want to lose this historic moment for our country.”

Klobuchar is in her third term as senator. She says there is plenty of work in Minnesota and that she’s in a unique position in the Senate to have influence.

"As the senator from Minnesota, I felt that I had my duty to do my work here in a big way," she said. "I also am in a unique position of being the highest-ranking Democrat on the Rules Committee for the Senate to work on these voting issues as well as a senior member of the Judiciary Committee to work on policing reform. And I felt that was very important right now.”

The senator also revealed Friday that her father, Jim Klobuchar, has contracted COVID-19. He is 92 and in an assisted living center.

She says he is doing fine now and doesn’t have many serious symptoms.