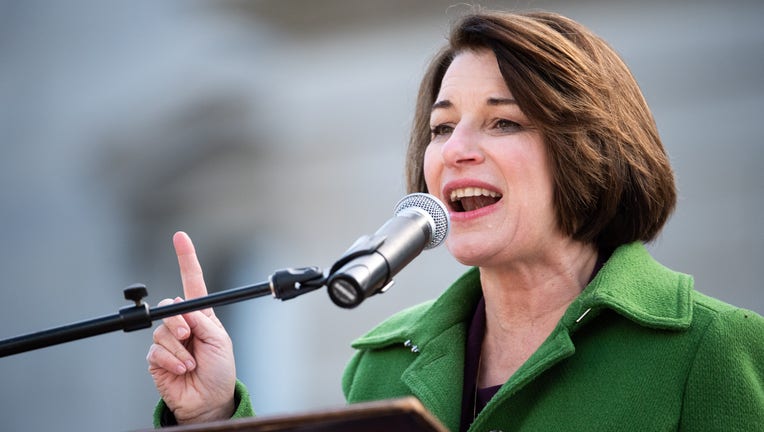 Democratic presidential candidate Sen. Amy Klobuchar (D-MN) addresses the crowd during the King Day at the Dome rally on January 20, 2020 in Columbia, South Carolina. The event, first held in 2000 in opposition to the display of the Confederate battl (Sean Rayford / Getty Images)

(FOX 9) - Democratic presidential candidate Amy Klobuchar says she was wrong to vote for a 2007 bill that included a provision making English the nation’s official language.

Klobuchar answered a question about the topic during a Vice News “Brown and Black Presidential Candidate Forum” in Des Moines on Monday. The event was held on Martin Luther King, Jr. Day.

“I think we’ve learned a lot since then including why we don’t want that to happen because it would be such a problem for immigrants trying to do everything from accessing government to vote,” Klobuchar said.

The vote came during Klobuchar’s first term as a senator. Monday, she said she’s been a longtime supporter of a pathway to citizenship for people who are in the U.S. illegally, noting that her Republican opponent ran ads against her on the issue in the 2006 campaign.

Monday marked the final day that Klobuchar and fellow Democratic U.S. Sens. Bernie Sanders and Elizabeth Warren will be on the campaign trail for several days. All three are being pulled to Washington for jury duty when the Senate impeachment trial starts Tuesday afternoon.

The Iowa caucuses are Feb. 3, two weeks away.

Monday, several of the candidates flew from events in South Carolina to Iowa to mark the MLK holiday.

During the Vice News event, Klobuchar defended her record during her eight years as Hennepin County attorney. She has faced criticism over the imprisonment of blacks for nonviolent drug crimes, but she said Monday that the black incarceration rate fell 12 percent during her time in office.

Later, during a lightning round question-and-answer session, she was asked the last time she’d smoked marijuana.

“You have to go back to college days,” Klobuchar responded, drawing surprise from the event’s moderators for the candidness of the answer. At least one other candidate, Andrew Yang, had evaded the same question earlier by answering “a past life.”

Earlier, Klobuchar avoided controversy by shuffling her schedule to attend King Day at the Dome, a major South Carolina NAACP event at the state Capitol.

Her campaign, citing a packed MLK Day schedule, had not planned to go to the event. But some black South Carolina Democrats criticized the decisions of Klobuchar and Pete Buttigieg not to attend.

Klobuchar ended up dancing along with several rival candidates to choir music on the Capitol steps. When it came time for her speech, she invoked King when referencing the upcoming Senate trial.

“We (Klobuchar, Warren and Sanders) may be just three of the 100 jurors, but we know we represent all of you,” Klobuchar said. “Our job is to bring Dr. King’s spirit of justice with us, just as we do justice for our country.”