Indiana Gov. Eric Holcomb announced that he had signed Senate Bill 1 within an hour of its passage in the state legislation. The bill outlaws abortions almost entirely in the state of Indiana with some exceptions. The Indiana Senate voted 28-19 to accept Senate Bill 1 after the bill passed the House earlier in the day – making the legislature the first in the nation pass such restrictions since the U.S. Supreme Court opened the door by overturning Roe v. Wade.

LOUISVILLE, Ky. - Karen Roper was so shaken by the demise of Roe v. Wade that she joined the abortion-rights struggle in Kentucky, where the future of abortion access could hinge on a constitutional question before voters this election.

Roper is part of a volunteer network canvassing neighborhoods seeking votes against the Nov. 8 ballot proposal. Kentucky voters are being asked to decide whether to amend the state constitution to declare outright that it doesn’t protect the right to an abortion.

The question reads: "To protect human life, nothing in this Constitution shall be construed to secure or protect a right to abortion or require the funding of abortion." 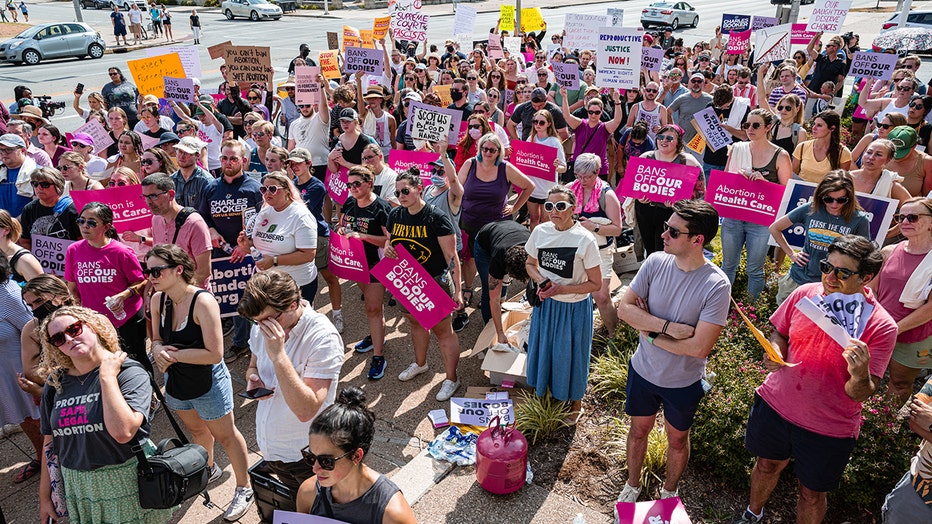 A crowd of abortion rights protesters gather in dissent of the Supreme Court's decision in the Dobbs v Jackson Women's Health case at The Gene Snyder U.S. Courthouse on June 24, 2022 in Louisville, Kentucky. (Photo by Jon Cherry/Getty Images)

"This issue is really beyond a candidate and it’s beyond a political party," she said. "I felt like this was more important than even any candidate I might care about."

Fervor is running high on both sides. Abortion opponents see the measure as a way to end any constitutional protections for abortion in Kentucky — perhaps settling the long legal fight for good.

"This is a pivotal moment in Kentucky’s history," said Addia Wuchner, chairwoman of the pro-amendment Yes for Life Alliance.

Currently, abortions are mostly on hold in Kentucky amid sparring over the constitutionality of a near-total abortion ban trigger law. Approved by lawmakers in 2019, the ban took effect after Roe was overturned. Now the ballot measure has intensified debate, with donations pouring in, politicians speaking out and advocates on both sides accusing the opposition of misleading voters.

Meanwhile, abortion-rights supporters have been encouraged by developments this summer in another conservative state, Kansas, where voters rejected a ballot measure that would have changed that state's constitution to let lawmakers tighten restrictions or ban abortions.

"In a very real sense, what is at stake is any future path to restoring access to legal abortion in the commonwealth," said Rachel Sweet of Protect Kentucky Access, an abortion-rights coalition.

Kentucky's constitutional battle has been brewing since the Republican-dominated legislature reserved a spot last year for the abortion measure this election cycle.

The stakes are high. In June, the Supreme Court struck down Roe v. Wade, and consequently abortions are on pause in Kentucky — with a narrow exception — as the state’s highest court reviews the law that halted the procedures.

"I knew there was a greater opportunity to make such a big impact in our state," said Senn, 20.

Abortion-rights supporters are using the ban in seeking to broaden opposition to the amendment. That law called for the immediate end to almost all abortions once Roe was overturned, except for abortions to save a pregnant woman’s life or to prevent disabling injury. There are no exceptions for rape or incest victims.

"For a lot of people, that is a shocking thing to hear ... even people who really have complicated feelings about abortion do think that there should be exceptions," Sweet said.

Abortion opponents say approval of the amendment would ensure abortion policy comes from the legislature — where they say it belongs — not the courts.

"Practically speaking, this … will keep state judges in their lane of interpreting the law and not inventing new laws and new rights that the constitution does not speak of," said Republican state Rep. Nancy Tate, a leading anti-abortion voice.

The trigger law is under challenge by the two abortion clinics that remain in Kentucky — both in Louisville, the state's largest city. The lawsuit said women were being "forced to remain pregnant against their will" in violation of the state’s constitution. Kentucky's Supreme Court has kept the ban in place while reviewing the case, poised to hear arguments after the election. The suit also challenges another state law banning abortions after about six weeks of pregnancy.

Democratic Gov. Andy Beshear, who has branded the trigger law as extreme, said the amendment vote will weigh heavily on the court case.

The abortion amendment has overshadowed other campaigns in a state where the GOP won total control of the legislature in 2016.

Abortion-rights supporters see the measure as a chance to reverse the anti-abortion momentum that led to several lawmaker-approved restrictions and conditions on abortion, many prompting court challenges. They say the legislature’s hardline stand on abortion is why constitutional protections are necessary.

Abortion opponents say the anti-abortion bills passed in recent years reflect the will of Kentuckians.

"Kentuckians value life. They value the life of the unborn child," said Wuchner, an ex-lawmaker and executive director of Kentucky Right to Life.

Tate said the legislature can discuss abortion legislation "any time that it is in session." That could include bills to expand exceptions to the abortion ban, where disagreement among Republicans would likely surface.

"I don’t support exceptions," Republican state Sen. Whitney Westerfield said at a recent gathering of lawmakers against abortion. "God made each of us in his image. He knew us before he formed us in the womb. This is a religious and faith question for me."