President Joe Biden and Vice President Kamala Harris were joined by former presidents Barack Obama, George W. Bush and Bill Clinton and their spouses at a wreath-laying ceremony at the Tomb of the Unknown Soldier at Arlington National Cemetery.

WASHINGTON (AP) - Joe Biden and Kamala Harris showcased American designers at their inauguration Wednesday, and Harris gave a nod to women's suffrage and Shirley Chisholm in pearls and purple. 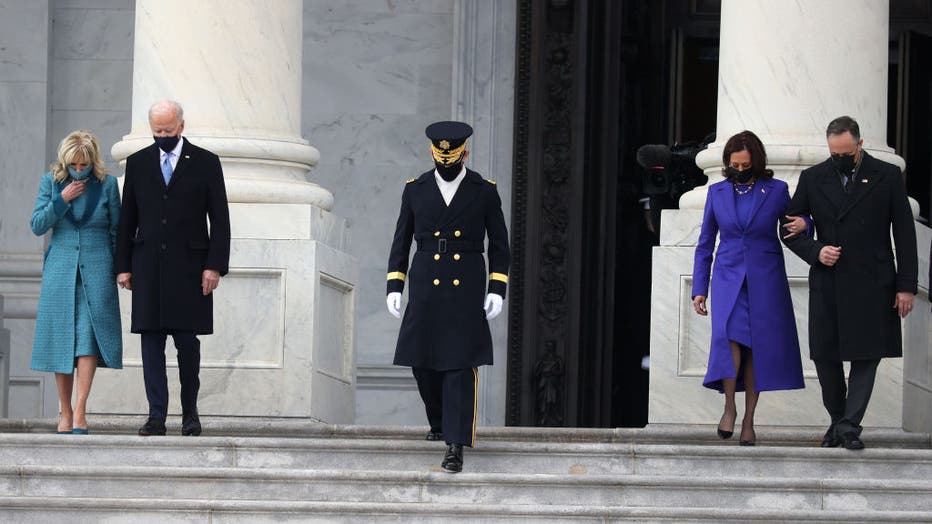 Michelle Obama, Hillary Clinton and Laura Bush also donned hues of purple. Harris has cited Chisholm, a Democrat from New York, as an inspiration for her career. Chisholm was the first Black woman elected to Congress and the first Black major-party candidate to run for U.S. president.

RELATED: ‘Parade Across America’: Performances, stories from everyday Americans to be featured in inauguration event

Pearls had a strong fashion showing, in line with a social media campaign. Nobody in attendance did them quite like Jennifer Lopez — from earrings to bracelets — as she sang "This Land is Your Land." 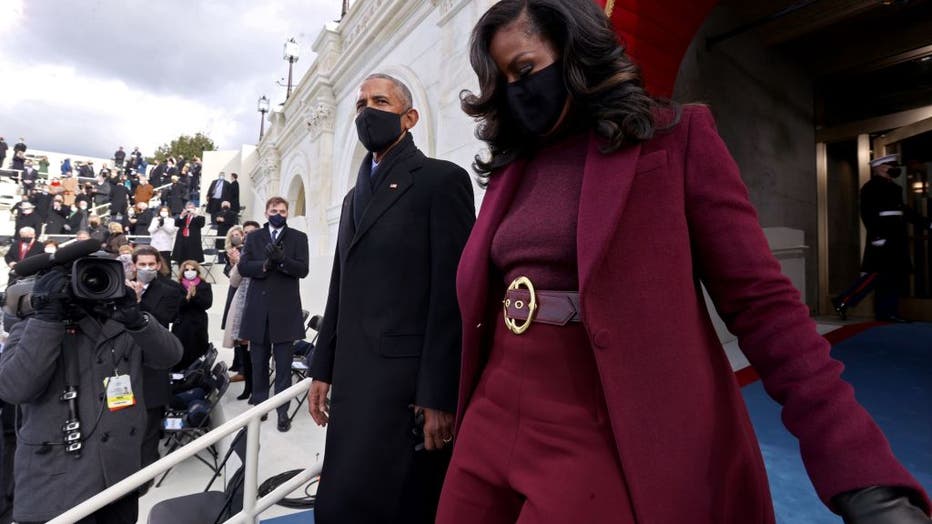 Former US President Barack Obama and Former US First Lady Michelle Obama arrive for the inauguration of Joe Biden as the 46th US President on January 20, 2021, at the US Capitol in Washington, DC. (Photo by JONATHAN ERNST / POOL / AFP) (Photo by JONA

Rep. Barbara Lee, a California Democrat, wore a pearl necklace owned by Chisholm. It was a gift from Chisholm's goddaughter. 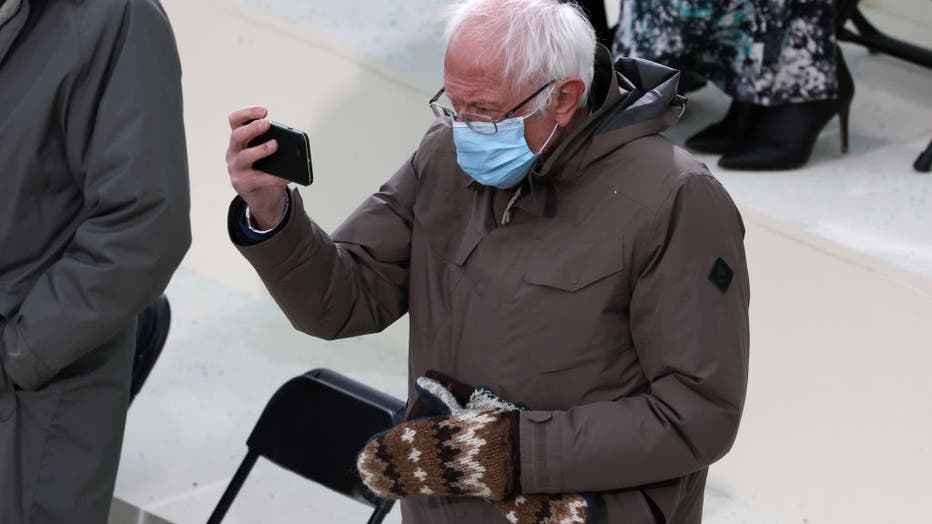 Sen. Bernie Sanders (I-VT) arrives at the inauguration of US President-elect Joe Biden on the West Front of the US Capitol on January 20, 2021 in Washington, DC. - During today's inauguration ceremony Joe Biden becomes the 46th president of the Unite

Jill Biden wore an ocean-blue wool tweed coat over a dress by American designer Alexandra O’Neill of the Markarian label. The new first lady's matching coat and dress set included a velvet collar and cuffs on the coat, and a chiffon bodice and scalloped skirt on the dress. The neckline of the dress is embellished with Swarovski pearls and crystals. The same crystals adorn the coat. The outfit was handcrafted in New York City. 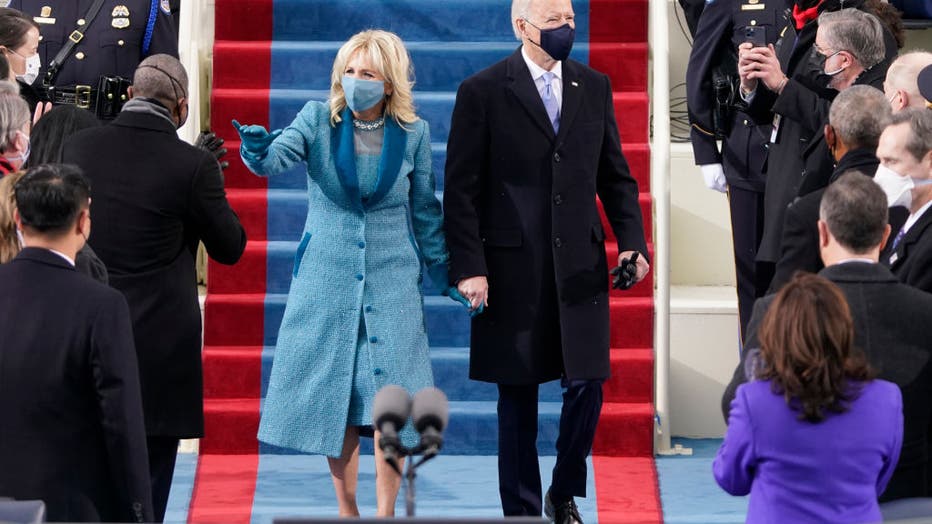 WASHINGTON, DC - JANUARY 20: President-elect Joe Biden and his wife Jill, walk out for the the 59th inaugural ceremony on the West Front of the U.S. Capitol on January 20, 2021 in Washington, DC. During today's inauguration ceremony Joe Biden becomes

Michelle Obama, a fashion icon, drew praise from fans on social media for her belted pantsuit in plum, also by Hudson.

Joe Biden wore a navy blue suit and overcoat by Ralph Lauren. It was a change from Brooks Brothers, the oldest U.S. clothier at 202. The brand has outfitted 41 of the 46 American Presidents, including Barack Obama during his inauguration in 2009. 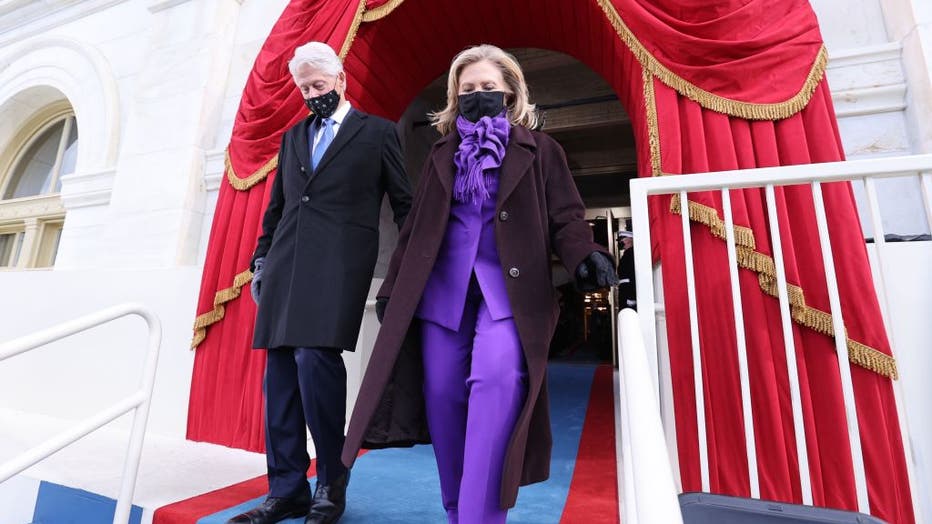 Former U.S. President Bill Clinton and his wife Hillary Clinton arrive for the inauguration of President-elect Joe Biden on the West Front of the U.S. Capitol on January 20, 2021 in Washington, DC.

Brooks Brothers fell on hard financial times last year, when it filed for bankruptcy protection and announced a planned sale. Ralph Lauren has a history of nonpartisan dressing, including moments with Michelle Obama and outgoing first lady Melania Trump. Joe Biden wore Polo shirts, emblazoned with the label’s pony and polo player logo, to take both of his COVID-19 vaccinations on television.

"They chose a diverse group of talents — Christopher John Rogers, Pyer Moss’ Kerby Jean-Raymond, Markarian’s Alexandra O’Neill and Jonathan Cohen — to be a part of this historic moment," she said. "It made for a meaningful statement at this particular time, when all small businesses, including fashion businesses, are in need of support and spotlighting."

Harris’ choice to wear pieces by Black designers "felt particularly significant in light of her triply historic title as the first female, Black and Asian American vice president of our country," Hyland added.

Lady Gaga sang the national anthem in a lavish custom Schiaparelli gown designed by Daniel Roseberry with a full red skirt and a black, long-sleeved top adorned with a humongous gold dove holding an olive branch. Garth Brooks went another way: country. He performed "Amazing Grace" in a black cowboy hat and blue denim jeans paired with a black suit jacket and shirt. 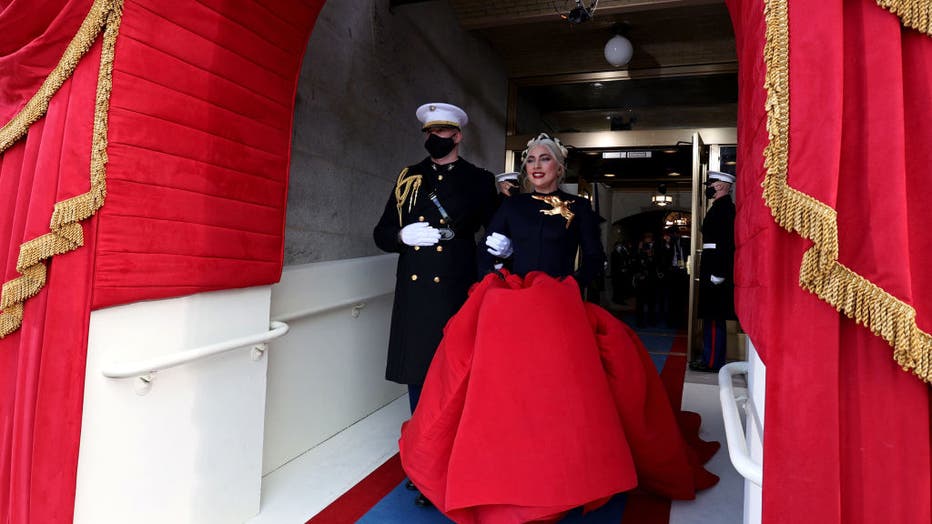 Singer Lady Gaga arrives for the inauguration of President-elect Joe Biden on the West Front of the U.S. Capitol on January 20, 2021 in Washington, DC. During today's inauguration ceremony Joe Biden becomes the 46th President of the United States.

Another inauguration fashion star on Twitter was Nikolas Ajagu, the husband of Harris' sister, Meena Harris. Sharp-eyed sneakerheads noted his ultra-rare and pricey Air Dior Jordan 1 shoes. The Dior 1s, a collaboration between Dior and Jordan, debuted last year and retail for $2,000. They're reportedly going for up to $7,000 on some sneaker resell sites.

Harris' stepdaughter, Ella Emhoff, schooled some of the older folks in her embellished Shetland Miu Miu coat in a pied de poule pattern and large brown button at the neck. The pointed white collar took the wind a time or two.