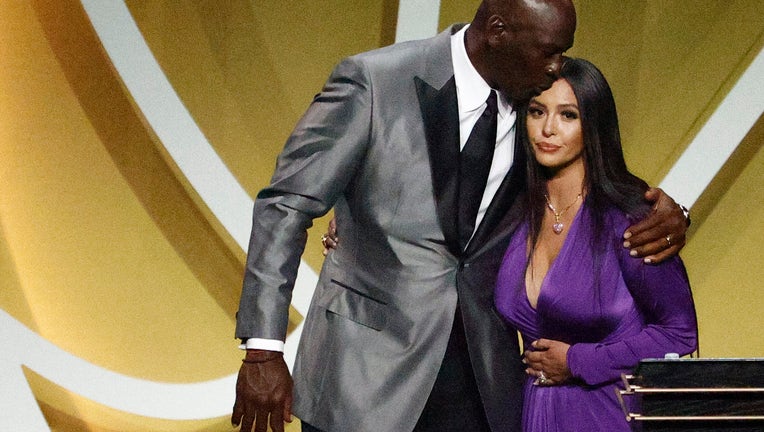 UNCASVILLE, CONNECTICUT - MAY 15: Vanessa Bryant is greeted by presenter Michael Jordan after speaking on behalf of Class of 2020 inductee, Kobe Bryant during the 2021 Basketball Hall of Fame Enshrinement Ceremony at Mohegan Sun Arena on May 15, 2021

LOS ANGELES - A judge has ruled that Kobe Bryant's widow must turn over her therapy records to Los Angeles County in her lawsuit claiming she suffered emotional distress after first responders took and shared graphic photos from the site of the 2020 helicopter crash that killed the basketball star, his teenage daughter and seven others.

U.S. District Court Magistrate Judge Charles Eick granted a request by county lawyers to review Vanessa Bryant's records, the Los Angeles Times reported Monday. But the judge limited the documents to the years since 2017, not 2010 as the lawyers had sought.

"Plaintiff has waived her psychotherapist-patient privilege by placing into controversy the reportedly extraordinary, continuing emotional distress allegedly resulting from Defendants' photograph-related actions or inactions," the judge wrote of the Jan. 26, 2020, crash near Los Angeles.

Vanessa Bryant testified in her deposition that because of the photos she has suffered constant fear and anxiety and has had trouble sleeping. She is suing for invasion of privacy, asking for damages for emotional distress. The case is scheduled for trial in February.

County lawyers led by outside counsel Skip Miller argue that the deaths themselves caused her distress, and they sought the therapy records to determine Bryant's mental state.

The same judge rejected a previous effort by the county to require her to undergo a mental health evaluation.

Her lawyers argued that the effort to get her therapy records was a further invasion of her privacy.

"The County continues to have nothing but the deepest sympathy for the enormous grief Ms. Bryant suffered as a result of the tragic helicopter accident. We are gratified that the Court has granted our motion for access to her medical records, as it is a standard request in lawsuits where a plaintiff demands millions of dollars for claims of emotional distress," Miller said in a statement obtained by the Times.

A Times investigation in March revealed that deputies had shared the grim images of the scene. The photos were shared internally and by one deputy who displayed his cellphone in a Norwalk, California, bar and by a fire captain who showed the images on his phone during an award shows cocktail hour.

Los Angeles County Sheriff Alex Villanueva ordered all deputies with images of the crash to delete them immediately after learning of a Jan. 29 citizen complaint about the bar incident.