'We Did It': Jennifer Lopez and Ben Affleck get married

Lopez shared this video of herself in her wedding dress along with Affleck getting ready for the big event.

Jennifer Lopez shared an intimate look at her Las Vegas, Nevada wedding as she announced her marriage to Ben Affleck on Sunday afternoon with a picture of the happy couple post surprise nuptials.

"We did it. Love is beautiful. Love is kind. And it turns out love is patient. Twenty years patient," she wrote in her newsletter.

Lopez wrote that the intimate wedding was "exactly what we wanted" as the pair smiled for pictures. Jennifer wore a strapless white dress with long lace sleeves, while Ben sported a classic white tuxedo for the midnight ceremony.

"Last night we flew to Vegas, stood in line for a license with four other couples, all making the same journey to the wedding capital of the world. Behind us two men held hands and held each other. In front of us, a young couple who made the three hour drive from Victorville on their daughter’s second birthday—all of us wanting the same thing— for the world to recognize us as partners and to declare our love to the world through the ancient and nearly universal symbol of marriage."

Jennifer wrote that they "barely made it to the little white wedding chapel by midnight" where her twins, Emme Maribel and Maximilian, appeared in the driver's seat from photos she shared of the pink Cadillac convertible "evidently once used by the king himself (but if we wanted Elvis himself to show, that cost extra and he was in bed)."

"So with the best witnesses you could ever imagine, a dress from an old movie and a jacket from Ben’s closet, we read our own vows in the little chapel and gave one another the rings we’ll wear for the rest of our lives. They even had Bluetooth for a (short) march down the aisle. 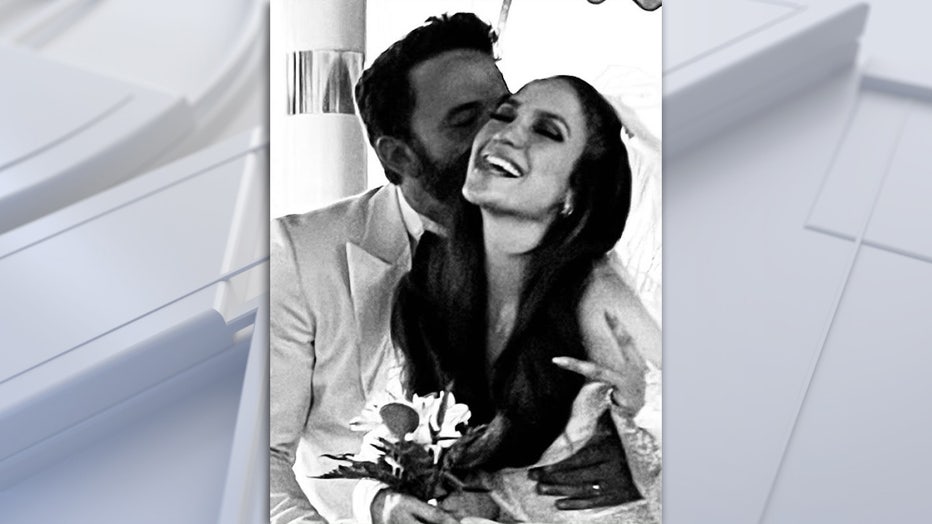 Jennifer Lopez shared this photo of her and new husband, Ben Affleck (via Storyful).

"But in the end it was the best possible wedding we could have imagined. One we dreamed of long ago and one made real (in the eyes of the state, Las Vegas, a pink convertible and one another) at very, very long last."

Lopez continued: "When love is real, the only thing that matters in marriage is one another and the promise we make to love, care, understand, be patient, loving and good to one another. We had that. And so much more. Best night of our lives. Thank you to the Little White Wedding chapel for letting me use the break room to change while Ben changed in the men's room."

The "Hustlers" star showed off another gorgeous gown in a video clip taken from what appeared to be her bathroom at home as framed photos of her family surrounded the room.

The couple first became engaged in 2002 and had plans to marry in September 2003, but postponed their wedding and eventually called things off by January 2004.

"They were right when they said, ‘all you need is love.’ We are so grateful to have that in abundance, a new wonderful family of five amazing children and a life that we have never had more reason to look forward to," she wrote.

"Stick around long enough and maybe you’ll find the best moment of your life in a drive through in Las Vegas at twelve thirty in the morning in the tunnel of love drive through, with your kids and the one you’ll spend forever with. Love is a great thing, maybe the best of things-and worth waiting for."

She signed off her post: "With love, Mrs. Jennifer Lynn Affleck." 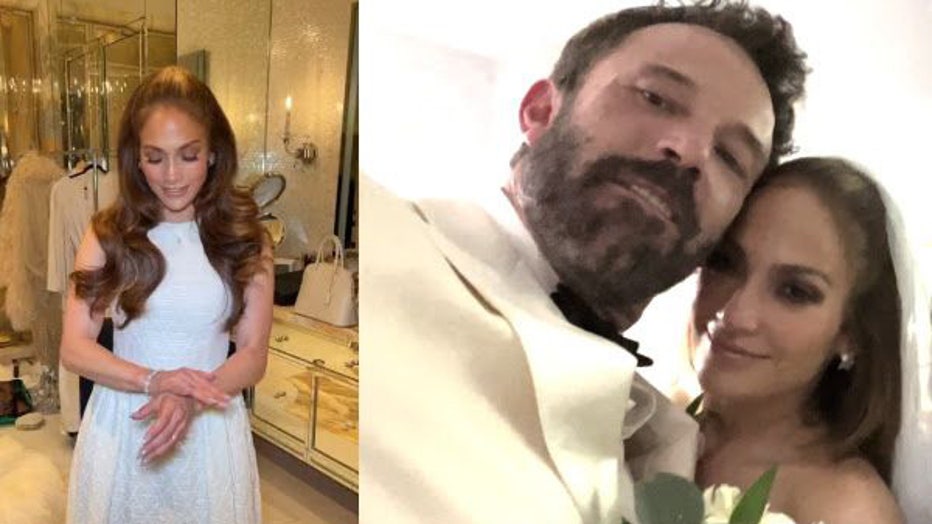 Jennifer Lopez shared these images of her and new husband, Ben Affleck (via Storyful).

JENNIFER LOPEZ RECALLS ‘BRUTAL’ CRITICISM SHE AND BEN AFFLECK ENDURED: ‘WE WERE JUST TOO YOUNG TO UNDERSTAND’

In a video shared with her subscribers, Affleck showed off his wedding attire while standing in front of a mirror with a black backpack and garment bag sitting on top of the sink.

"And this is my wedding changing area," he revealed while scanning the pink-tiled room, which included a few wooden coat hangers and graffiti etched into the mirror.

Court documents show the 52-year-old singer, listed as "Party 2," requested a "new name" on their marriage certificate filing, which was first received on Saturday, July 16, and filed on Sunday with the Clark County Clerk's Office.

Ben is listed as "Party 1" on the document, with his full name recorded as "Benjamin Geza Affleck."

The "Marry Me" star previously changed her name when she was married to singer Marc Anthony. Nearly six months after their divorce was finalized in 2014 — and three years after they had separated — Lopez dropped his surname, Muniz.

The couple does not have any children together, but share several children from previous relationships.