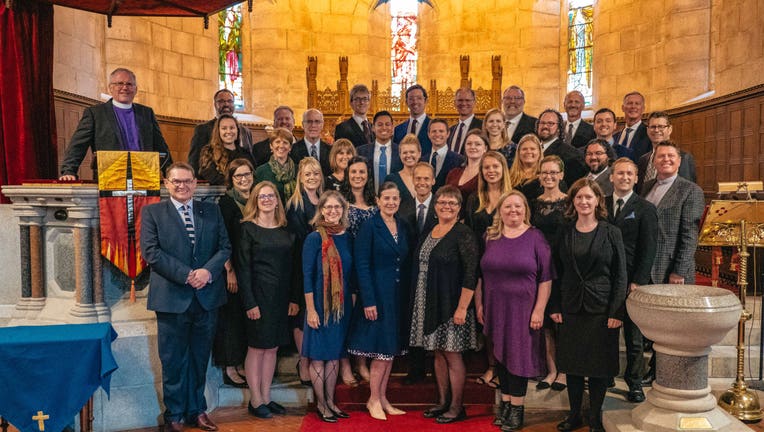 PopUp Choir poses inside Crathie Kirk, a small church where the Royal family worships when they stay at Balmoral Castle in Scotland at the end of the summer. (Andy Stenz)

ST. PAUL, Minn. (FOX 9) - Gloria Dei Lutheran Church in St. Paul may be filled with the music of heaven, but the choir that will perform there next month has already received the royal treatment here on Earth.

Gloria Dei Lutheran Church in St. Paul may be filled with the music of heaven, but the choir that will perform there next month has already received the royal treatment here on Earth.

PopUp Choir was started in the Twin Cities a few years ago by a group of 30 to 40 friends, who share a love of choral music and wanted to sing together. They formed their own informal chorus to lift their voices in song about three or four times a year around the metro area.

"All of these people at some level are artists they are people whom making music is a part of what gives meaning to their life and at the core of that is a love of sharing that art with others and PopUp Choir is one of the ways that gives them the opportunity that allows them to do that,” said Jonathan Guyton, PopUp Choir producer. 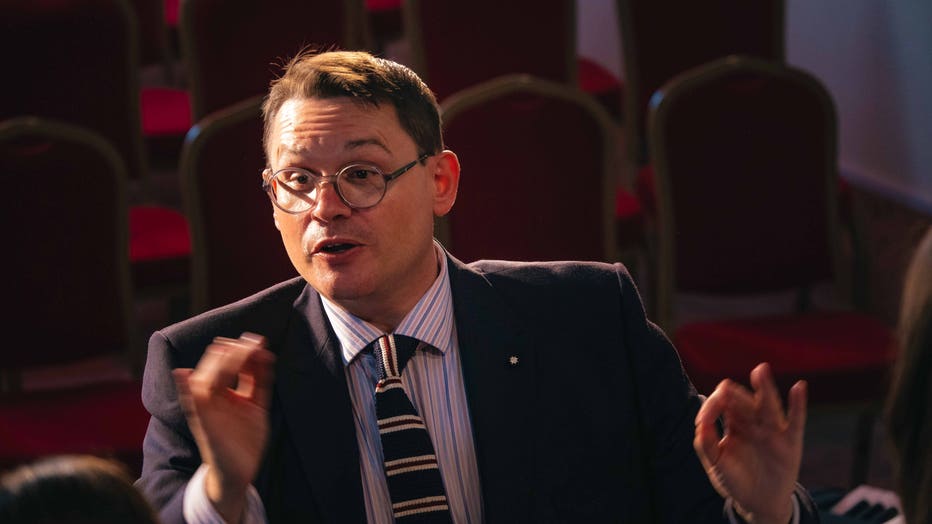 Composer Paul Mealor, who invited PopUp choir to sing in Scotland and arranged for them to sing for the Queen. (Andy Stenz)

After visiting Minnesota as a guest conductor for the group last year, Composer Paul Mealor, who wrote a special song for Prince William and Kate Middleton's wedding back in 2011, invited the local ensemble to do a short tour of Scotland. To the choir’s surprise, the tour included a performance for the Queen of England and several members of the royal family.

"Unbeknownst to us he spoke to Her Majesty the Queen and said, ‘This American choir I know will be here. What would you think of them coming to sing when you go to your church on the Sunday that they'll be in the area?’” said Guyton. “And Her Majesty agreed and that's how that came about. We were blown away."

On the third of their four days in Scotland, the choir made the trek to a small church near Balmoral Castle to sing at a Sunday morning service for Queen Elizabeth the II, Prince Charles and Princess Anne. 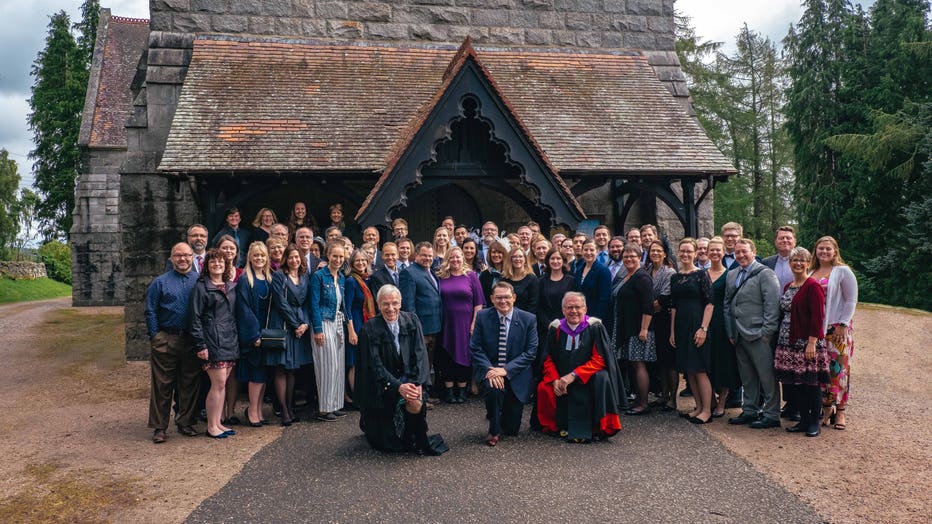 PopUp Choir stands outside Crathie Kirk after singing for Queen Elizabeth, Prince Charles, Princess Anne and other members of the royal family on Sept. 1, 2019. (Andy Stenz)

Choir members weren't allowed to meet or take any pictures of the royal family, but they performed several songs handpicked by the queen with the royals sitting in the front row 15 feet away.

"Paul [Mealor] had told us when she comes in, don't [stare], so when she came in we were trying to be very composed,” said Nelson. “And I saw her come in and my heart started pounding more than any audition ever. It was so exciting."

Nelson said it was entirely different experience seeing such an iconic figure in person. 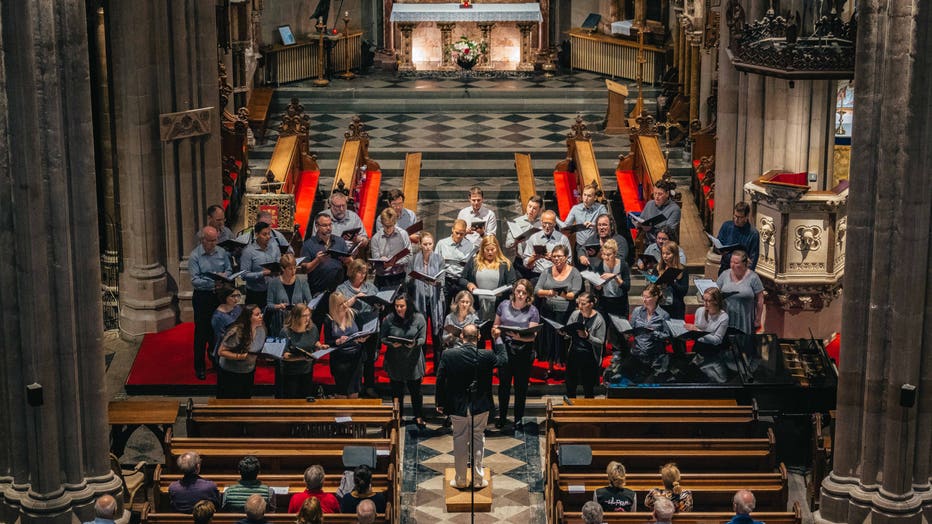 PopUp choir performing at Cathedral of Dundee in Dundee, Scotland on August 30 during a 4-day tour of country. (Andy Stenz)

"And of course a fantastic hat, which is the first thing I noticed when she came trucking down the aisle,” said Nelson. “She is so cute and very tiny. You watch the royal weddings on TV. These are the only images you have and then she is right there. It was mind-blowing. It was so fun."

After their whirlwind trip to Great Britain, the choir's crowning achievement is still sinking in.

"We're not sure 100 percent sure, but we've been told at least in that setting in Scotland, we are the first American or foreign choir to ever be invited to sing in such a setting for Queen Elizabeth," said Guyton. 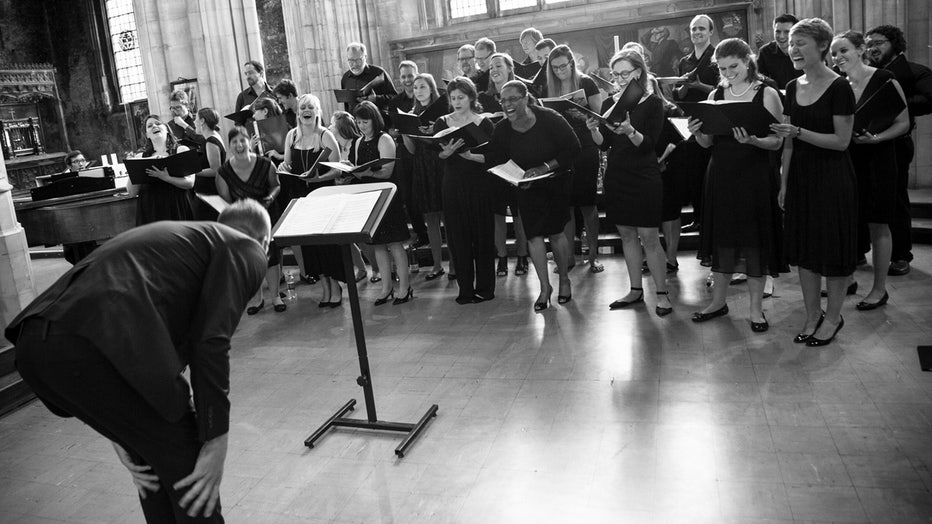 PopUp Choir performing during trip to London in 2016. (Cameron Slater)

Their close encounter with Her Royal Highness has PopUp Choir wondering how much higher their spirits can go.

"It was just a mountain top experience for me and memories I will cherish for the rest of my life," said Nelson.

PopUp Choir will recreate their royal performance at Gloria Dei Lutheran Church in St. Paul on Saturday, October 12. Mealor will travel from Scotland to be their guest conductor and an original piece he wrote for the choir will make its world premiere that night. 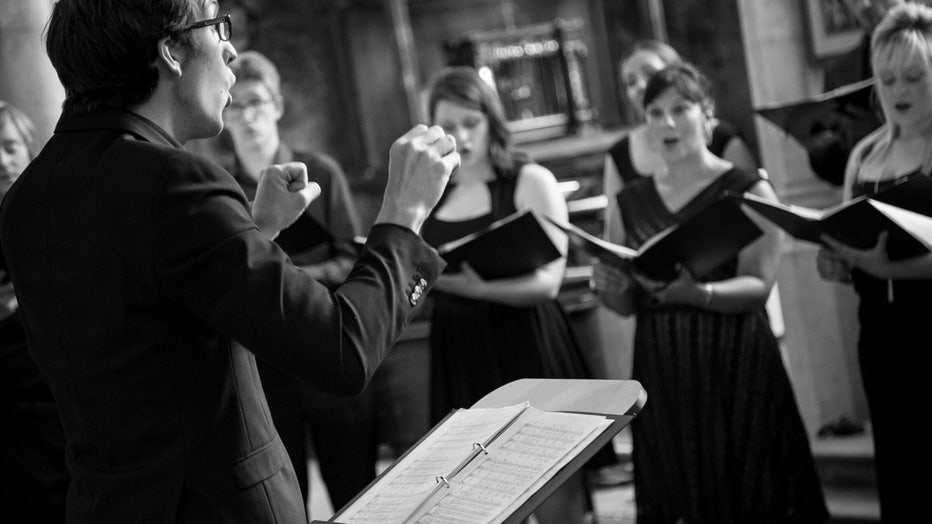 PopUp choir performing during trip to London in 2016. (Cameron Slater)