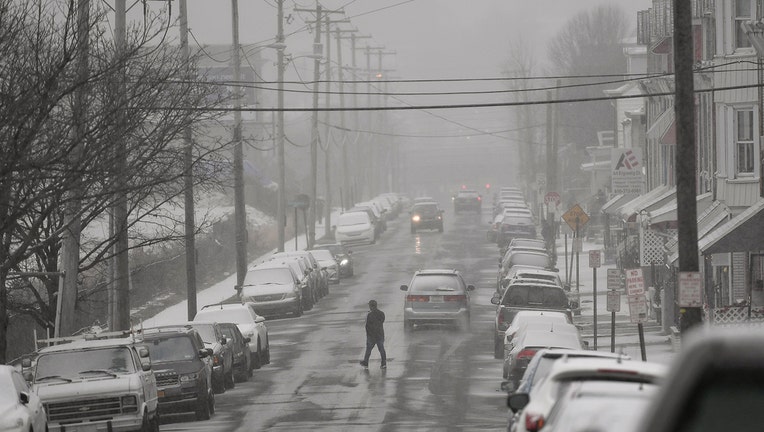 A person crosses the street in the 900 block of North 6th street in Reading Wednesday afternoon December 16, 2020 during a snow storm.

NEW YORK - A major winter storm will spread across the Northeast and mid-Atlantic Wednesday into the overnight hours, bringing heavy snow, gusty winds and coastal flooding.

The system is currently developing along the eastern coast of the United States and is expected to bring one to two feet of snow to sections of the Northeast — one of the stronger storms in the last five years.

“The biggest weather story over the next few days will undoubtedly be from a major winter storm that is set to bring an overabundance of hazards from the Mid-Atlantic to the Northeast,” the National Weather Service (NWS) said.

The biggest threat from the winter storm will be heavy snowfall.

Snow is expected to spread over the Ohio Valley, central Appalachians, and northern Mid-Atlantic on Wednesday. Between the snow in the north and the rain in the south, a wintry mix is forecast to stretch across the southern Appalachians and the interior Mid-Atlantic roughly along the I-95 corridor, according to NWS.

“This means major cities, such as Washington D.C. and Philadelphia, will likely see a wintry mix and potentially plain rain for areas just to the southeast. Further north and east, heavy snow will also encroach upon much of the Northeast and southern New England this evening, including New York City and Boston. As the storm strengthens off the New Jersey coastline tonight, strong northeast winds will likely lead to coastal flooding from Delaware to Cape Cod,” the NWS said.

A powerful nor’easter moving across Maryland on Wednesday, December 16, was expected to bring freezing temperatures and snowfall into the night, the National Weather Service (NWS) reported. (Credit: @RiverGirl707 via Storyful)

“It has a lot of heavy snow, so the maximums snowfall totals are probably going to be 18-24 inches across parts of Central Pennsylvania and Northeastern Pennsylvania, Southern New York state, and Catskills and the Poconos,“ Bob Oravek, lead forecaster of the National Weather Service in College Park, Maryland told FOX TV Stations. “The snowfall amounts may extend from Boston back to Hartford to Albany, so in a sense it will be a fairly typical distribution for a big storm.”

The heaviest snowfall amounts from the system are currently forecast across central Pennsylvania, where as much as two feet of snow is possible. The accumulation will likely lead to very dangerous, if not impossible, travel conditions and isolated power outages.

Many locations from eastern West Virginia to far southern Maine are forecast to see a foot of snowfall accumulation. “In certain areas, this would be more snow in one event than was seen all of last winter,” the NWS said.

“There could be some very heavy hourly snowfall amounts when that band does fall at two to four inches per hour,” Oravek explained.

Wind gusts up to 50 mph will be possible, so combining the wind with the snowfall means there is always the potential for downed trees and powerlines.

According to the Associated Press, New York City officials have ordered all outdoor dining be suspended by 2 p.m. ET Wednesday, around the time when the storm is expected to start dumping a foot or more of snow in the city. Restaurants are also facing challenges on how to protect their outdoor dining spaces from a fleet of snow plows.

Meanwhile, Beginning at 1 p.m. Wednesday in New Jersey, commercial vehicles will be prohibited from the interstate highways that cross the state. The restriction includes all tractor-trailers, passenger vehicles pulling trailers, recreational vehicles and motorcycles.

Flooding from heavy rain will also be possible across portions of the Mid-Atlantic where temperatures are too warm for wintry precipitation.

“In case that wasn't enough, severe thunderstorms could bring damaging winds and isolated tornadoes across the Outer Banks in eastern North Carolina this afternoon,” the NWS said.

“It’s not a really long-lasting storm; it’s not expected to snow very long, but it will be snowing heavy,” Oravek said.

This system will continue moving East Northeast toward the Canadian Maritimes before weakening and moving out to sea. While this system will exit the United States by tomorrow morning, icy roads and bitter cold temperatures will remain, which means it will take longer for snow to melt and these conditions could last through the weekend.