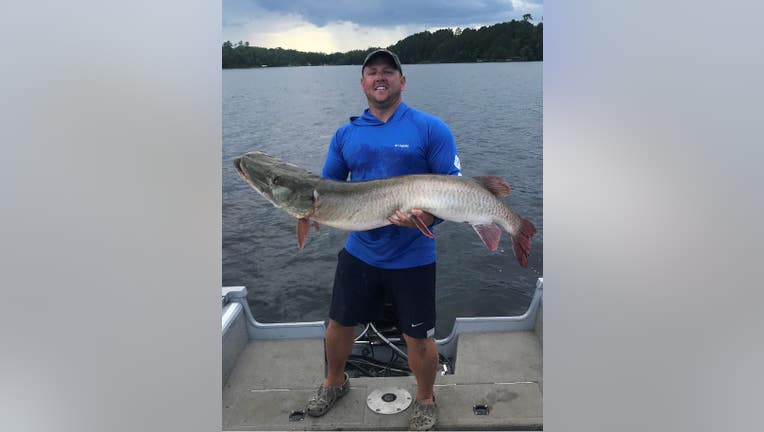 (FOX 9) - An angler from Iowa caught and released Minnesota's new state record muskie over the summer.

On Aug. 6, while fishing alone at his family’s cabin on Lake Vermilion, Corey Kitzmann of Davenport, Iowa caught a 57 1/4-inch muskellunge on a homemade bucktail lure, according to the Minnesota Department of Natural Resources. The fish, which weighed approximately 47 pounds, was a new catch-and-release state record for muskie.

The previous record was a 56 7/8-inch fish caught on Pelican Lake in Otter Tail County in 2016.

Kitzmann told the DNR catching the fish had a special meaning for him. Earlier that day, he had learned that one of his best friends had passed away from a medical condition at age 40.

Since he was alone at the cabin, he opted to process his grief by fishing.

After catching the fish, Kitzmann flagged down a nearby boater to take photos of him and his fish and help him release it.

Kitzmann said he spent the next two hours making phone calls to friends and family to tell them about the big catch.

“As the phone calls winded down I couldn’t help but think that one of my best friends, Brian Cronkleton, was looking down on me that day – Aug. 6, 2019, is a day that I’ll certainly never forget,” Kitzmann told the DNR.

The DNR certified the state catch-and-release record fish on Oct. 11.