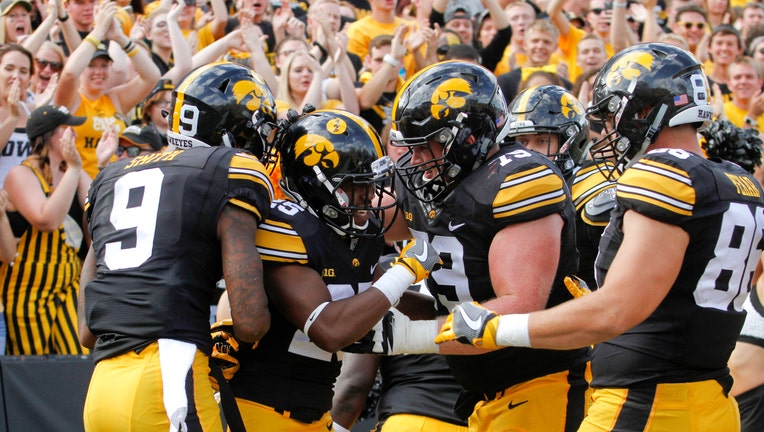 IOWA CITY, IOWA- SEPTEMBER 3: Running back Akrum Wadley #25 of the Iowa Hawkeyes celebrates with wide receiver Jerminic Smith #9 and offensive lineman Sean Welsh #79 after scoring a touchdown during the second quarter against the Miami (OH) RedHawks

IOWA CITY, Iowa (AP) - The Iowa football program’s culture has suffered from racial bias against Black players and bullying by a small number of current and former coaches, according to an investigation report released Thursday.

University of Iowa President Bruce Harreld said the report by an outside law firm shows that the “climate and culture must and will change within our football program.”

“Our student-athletes must have the ability to be true to themselves, and we cannot and will not tolerate a systemic process that inhibits authenticity,” Harreld said in a statement.

Coach Kirk Ferentz, the longest-tenured head coach in college football, appears likely to keep his job, however. The report found that many players believe he has already made several positive changes in recent weeks.

The university hired the Husch Blackwell law firm in June to review the program after dozens of former players, most of them Black,, spoke out on social media to allege racial disparities and mistreatment.

In addition to a public report summarizing the findings, the firm provided the university with four confidential personnel reports on current and former staff who were accused of mistreating players. Harreld said the university will address the allegations against those coaches, who were not publicly identified.

Last month, the university cut ties with longtime strength and conditioning coach Chris Doyle, awarding him a $1.1 million severance agreement. Several players had cited Doyle as the major source of their mistreatment, an allegation he has denied.

But the review found the cultural problems went well beyond Doyle.

Investigators found that many current and former Black players felt unhappy and unwelcome in the program, where the ideal player “was built around the stereotype of a clean-cut, white athlete from a midwestern background.” They described an environment in ”which a small number of coaches felt empowered to bully and demean athletes, especially Black athletes,” the report found.

“In sum, the program’s rules perpetuated racial or cultural biases and diminished the value of cultural diversity,” the report concludes. “The program over-monitored players to the point that they experienced heightened anxiety and maintained a culture that allowed a small group of coaches to demean players.”