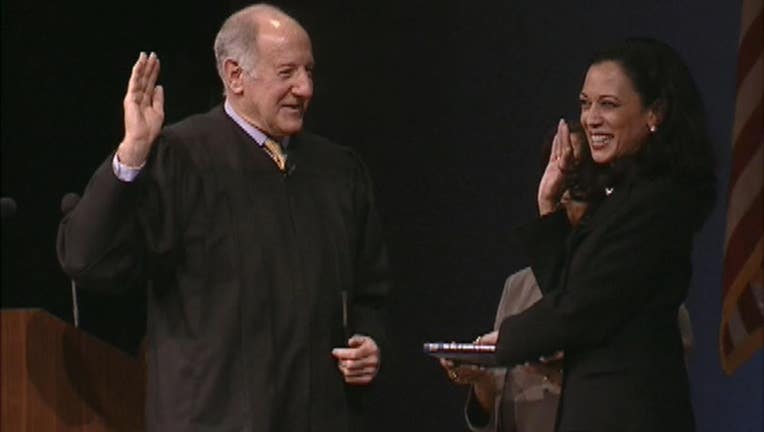 Kamala Harris is sworn in as San Francisco's District Attorney in Jan. 2004.

SAN FRANCISCO - Seventeen years before Kamala Harris was elected as the nation’s next vice president, she launched her career in politics as San Francisco’s top prosecutor.

The 39-year-old attorney from Oakland unseated an incumbent district attorney, establishing her as a political superstar that would only gather more momentum in the years to follow.

"I think when she walks into a room, when she’s laying out her vision, when she’s talking to an audience, that’s going to stand out wherever she is, and we saw that here while she was a prosecutor," said Paul Henderson, who was Harris’ chief of administration during her seven years as San Francisco’s district attorney.

Seventeen years before Kamala Harris was elected as the nation’s next vice president, she launched her career in politics as San Francisco’s top prosecutor.

Harris was elected district attorney following a bitter contest in 2003 against incumbent Terence Hallinan and assistant district attorney Bill Fazio. The contest went to a runoff between Harris and Hallinan – a former defense attorney.

Both candidates campaigned on progressive issues, like ending the death penalty. Harris, though, ran to the right of Hallinan, pledging to be smart on crime like gun violence plaguing the city’s poorest neighborhoods.

Once elected, Harris began a suite of reforms that are being mirrored by progressive prosecutors around the nation almost two decades later, including reimagining drug cases by focusing on rehabilitation over punishment.

But just four months into her first term, Harris’ campaign promises would be put to the test.

But despite the overwhelming pressure, she declined to pursue capital punishment. Hill was later convicted of second degree murder – and not eligible for the death penalty.

Time Magazine’s Person of the Year award dates back to 1927 when Charles Lindbergh was hailed for transatlantic flight. On Thursday the honors for 2020 went to Joe Biden and Kamala Harris.

Over the next seven years, Harris would regain support of many police groups. During her time in office, she presided over a 50% decrease in homicides between 2008 and 2009, when killings fell from nearly 100 to 45 in one year.

"She added tremendous energy to the vice president -- his ticket -- and I think that she’s going to bring that to being the highest elected woman in this country," said Suzy Loftus, who also worked in the DA's office with Harris and later became part of her team at the state attorney general’s office.

"It takes politicians willing to be courageous enough to do things differently, and I think we’ve started to see the results but we’ve got a long way to go," she said.

As the tie-breaking vote in the Senate, Harris will have power that few vice presidents have ever seen.

"She will cast the deciding vote each time there is a tie and believe me that’s an awesome amount of power," said former San Francisco Mayor Willie Brown, who supported Harris early on in her political career. "She is going to be relied upon by the president more than any previous vice-president and she is going to be respected by her fellow senators."

Evan Sernoffsky is an investigative reporter for KTVU. Email Evan at evan.sernoffsky@foxtv.com and follow him on Twitter @EvanSernoffsky