Tsunamis have devastated countries around the world, costing countless lives and leaving behind millions of dollars in damage.

Here is a look at some of the most notable tsunamis that have struck around the globe. 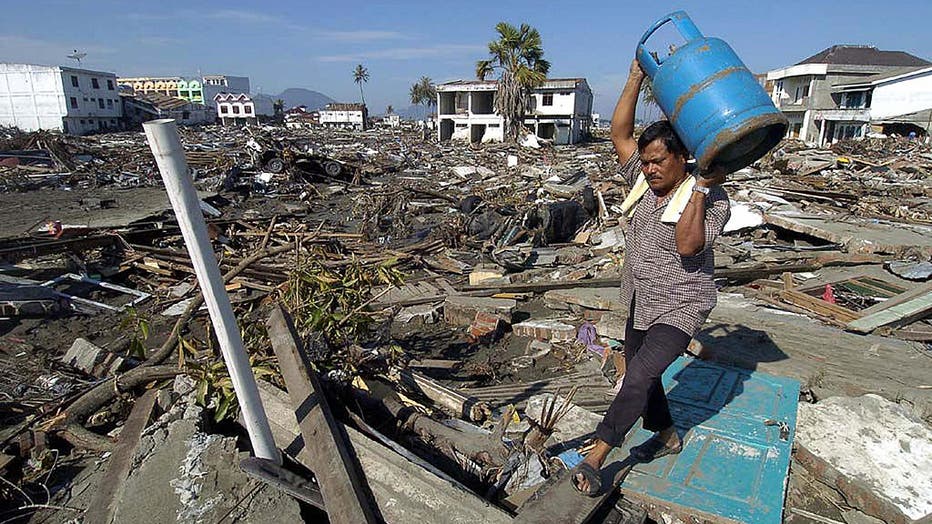 An Acehnese man salvages a can of profane gas from his destroyed home in Banda Aceh, Dec. 30, 2004, as the clean up continues following the earthquake and tsunami that hit Aceh province 26 December. AFP PHOTO/Bay ISMOYO (Photo credit should read BAY

On Dec. 26, 2004, a massive tsunami was triggered by a magnitude 9.1 earthquake off Sumatra island. The giant wall of water killed about 230,000 people in a dozen countries as far away as East Africa. Indonesia’s Aceh province, which was closest to the earthquake, was hit first and hardest.

RELATED: Tsunami preparedness: What to do in the event of an emergency

More than 170,000 people died in Indonesia alone, about three-quarters of the overall death toll. More than 8,000 people in Thailand died or went missing in the disaster, and the bodies of almost 400 victims remain unidentified and unclaimed. 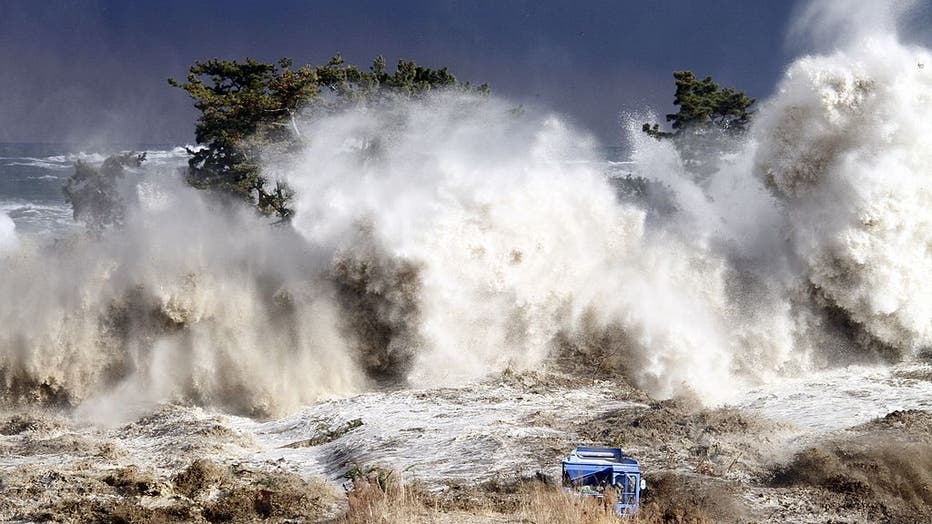 This picture taken on March 11, 2011 by Sadatsugu Tomizawa and released via Jiji Press on March 21, 2011 shows tsunami waves hitting the coast of Minamisoma in Fukushima prefecture. The number of people confirmed dead or listed as missing in Japan ne

On March 11, 2011, a magnitude-9.0 quake struck Japan’s northeastern coast, setting off a tsunami and nuclear crisis that devastated the country.

More than 18,000 people died, mostly in the tsunami, and nearly half a million people were displaced. The government recognizes another 3,700 — mostly from Fukushima prefecture — who died of causes linked to the disaster, such as stress.

The days following the quake were terrifying for many in Japan and farther afield, as hydrogen explosions released radiation into the air and technicians worked furiously to try to cool the plant’s nuclear fuel by pumping in seawater. There were concerns and confusion about the extent of meltdowns, and how far radiation might travel, including fears that Tokyo and even the U.S. west coast were at risk. Officials said they were not, but panicked shoppers as far away as China and Russia scrambled to stock up on goods they thought would protect them.

More than 10 years on, more than 40,000 people are still unable to return home, and areas near the wrecked plant are still off-limits due to contamination from the initial radiation fallout. Many in Japan have said that the country’s intense focus on physically rebuilding has at times ignored other healing that needed to be done. 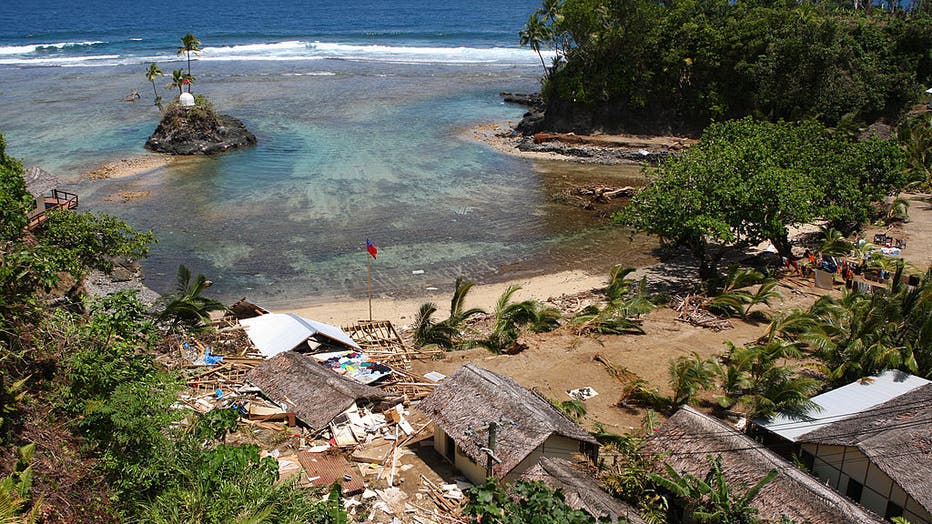 A general view of the devastation of the destroyed Seabreeze resort following the 8.3 magnitude strong earthquake which struck 200km from Samoa's capital Apia on Tuesday on October 2, 2009 in Apia, Samoa. (Photo by Phil Walter/Getty Images)

On Sept. 29, 2009, a magnitude-8.0 earthquake generated tsunamis of up to 40 feet that swept through the region, killing 194 people, including 34 in American Samoa. Cars and boats — many battered and upside down — littered the coastline. Debris as small as a spoon and as large as piece of masonry weighing several tons were strewn in the mud.

The Pacific Tsunami Warning Center in Hawaii said it issued an alert, but the waves got to the islands so quickly that residents only had about 10 minutes to respond. Another system designed to alert aid agencies suffered a hardware malfunction that delayed notification, but that did not affect island residents.

Four tsunami waves 15 to 20 feet (4 to 6 meters) high roared ashore on American Samoa about 15 minutes after the quake, reaching up to a mile (1.5 kilometers) inland, officials said. 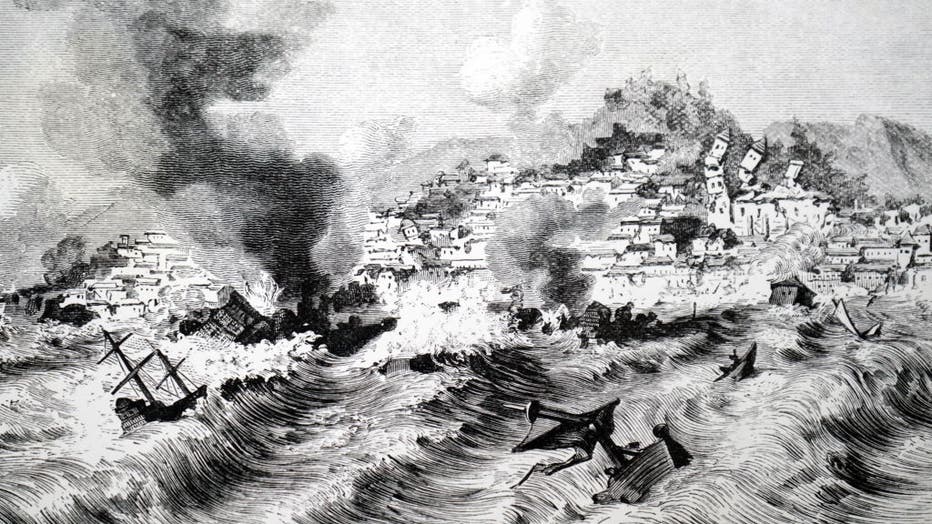 On Nov. 1, 1755, an estimated magnitude 8.5-9.0 truck in the Atlantic Ocean off of Cape St. Vincent. According to SMS Tsunami Warning, about 40 minutes after the quake, an enormous tsunami wave engulfed the harbor and downtown Lisbon, rushing up the Tagus river. The earthquake killed more than a third of the entire population of the Portuguese capital. Tens of thousands of Portuguese who survived the earthquake were killed by the tsunami triggered by the earthquake. The tsunami was accountable for most of the about 70,000 deaths in Portugal, Spain and Morocco, according to the website.