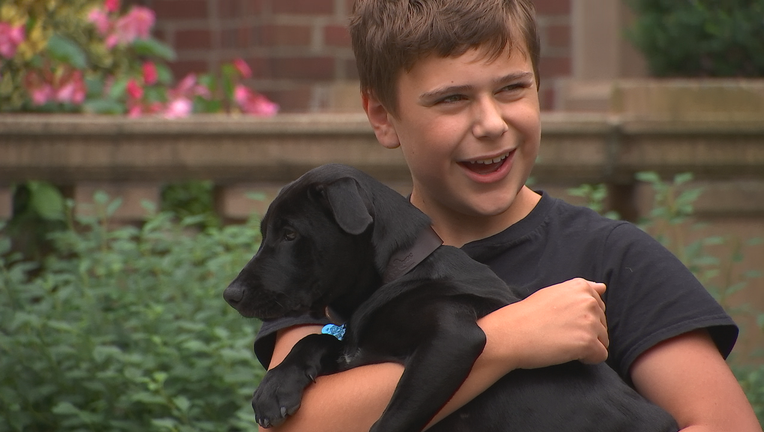 Governor Tim Walz fulfilled a campaign promise to his son, Gus, by adopting a puppy. (FOX 9)

But, this wasn’t any campaign promise – it was one he made with his son.

The deal? If Gov. Walz won the gubernatorial race, the Walz family would adopt a puppy.

“We were in the room on Election Night, and the folks were in there, and it came on TV they called the race, and Gus immediately screamed, ‘I get a puppy!’” said Gov. Walz.

On the lawn of the Governor’s Residence Thursday, Gov. Walz introduced the newest member of their family.

“After eight months of intense negotiations and deal-making, we have new addition to our family,” said Gov. Walz. “This is Scout!”

Minnesota Governor Tim Walz is finally making good on his campaign promise after he was elected last year.

The three-month-old black lab mix is a rescue from Midwest Animal Rescue.

“He was found in a box in Oklahoma next to a high-kill shelter,” said Gus Walz, the governor’s son.

Scout seemed a little camera shy at first as he spent most of his first appearance with his nose to the ground, hiding among the flowers. Soon enough, Scout warmed up to the extra attention and enjoyed all the pets and cuddles.

“If people are wondering about a rescue animal, this is the sweetest, gentlest... and if you look, he’s beautiful,” said Gov. Walz.

The Walz family's cat, Afton, however is still warming up to the new puppy.