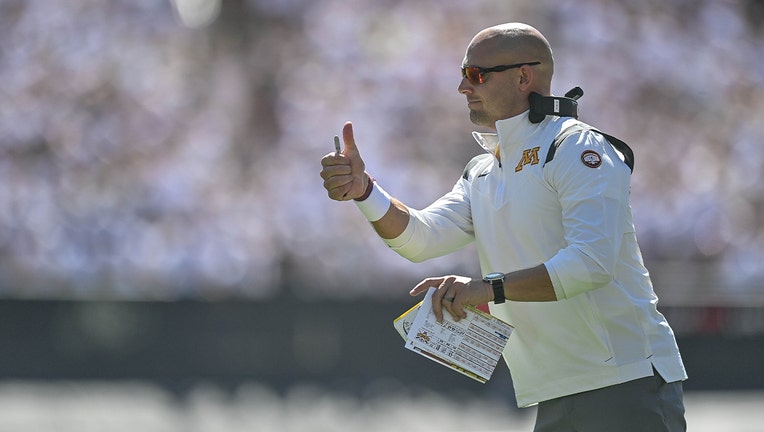 Head coach P. J. Fleck of the Minnesota Golden Gophers signals to a referee during the second quarter of a game against the Colorado Buffaloes at Folsom Field on September 18, 2021 in Boulder, Colorado. (Photo by Dustin Bradford/Getty Images) (Getty Images)

MINNEAPOLIS (FOX 9) - The University of Minnesota has signed head football coach P.J. Fleck to a new seven-year deal that keeps him with the Gophers through the 2028 season.

Fleck was previously under contract through the 2026 season, with a $4.5 million buyout. Details of the new contract have not been released.

Fleck and Director of Athletics Mark Coyle will hold a joint news conference Wednesday at 1:15 p.m.

"This is home," Fleck said in a statement. "Our family loves it here and we are excited to continue this journey at the University of Minnesota. From day one, we talked about cultural sustainability and how important it is to building a successful football program and life program. Today is another step in that process, and this new contract is a commitment to our elite staff and the entire state of Minnesota."

The Gophers are off to a 6-2 record this season and a 4-1 record in the Big Ten, which puts them at the top of the Big Ten West. The team was ranked No. 20 in the first College Football Playoff rankings released this week.

Fleck is his fifth season with the Gophers. In that time, he has led Minnesota to two top 10 wins—Penn State and Auburn—and guided the Gophers to its most wins since 1904 during their 11-win season in 2019. He has coached Minnesota to a school-record seven Big Ten wins in a single-season and has had the Gophers ranked as high as No. 7 in the AP Poll and No. 8 in the College Football

Eight of Fleck’s players have been selected in the NFL Draft, including first-round draft pick Rashod Bateman in 2021.