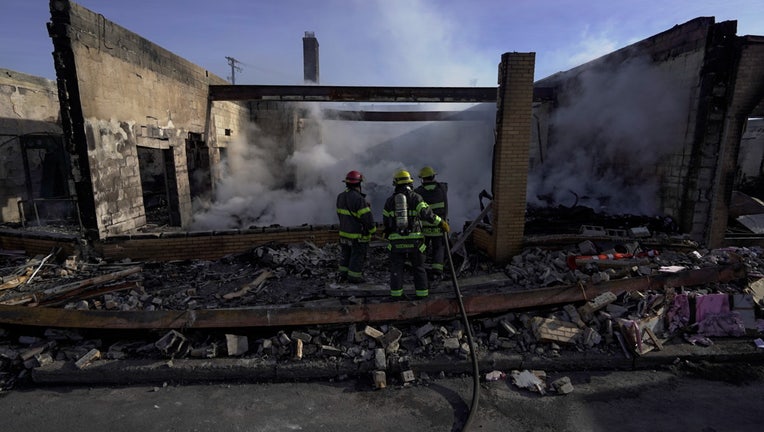 Crews clear the scene after a building was destroyed on Lake Street in Minneapolis.

MINNEAPOLIS (FOX 9) - A fund created to support the rebuild of businesses along the street that's seen perhaps the most destruction during riots in Minneapolis has raised more than $2 million.

According to a website set up by the Lake Street Council, a non-profit neighborhood organization, more than 27,000 people have donated to the fund set up in recent days.

Lake Street became the center of the protests this week as crowds turned their anger towards Minneapolis police's Third Precinct after the death of George Floyd.

Fires were set, stores were looted, and general chaos reigned on Wednesday and Thursday, leading up to rioters storming the police station and setting a fire.

It's unknown exactly how much damage was incurred in that area.

According to the fundraising website, the $2 million raised, and any other funds collected moving forward, will go directly to support small businesses impacted by the riots.

The council says it is also making a donation, using its operating funds and not fundraiser money, to send a gift to the family of George Floyd as well.

Floyd died after being arrested by police on Monday. According to charges against one of the officers, Floyd became unresponsive while the officer pressed his knee into his neck.

That officer, Derek Chauvin, is now charged with murder. But, in the days after the death, protests turned violent, leading to raging riots across several nights.

Saturday and Sunday, Governor Walz mobilized the full Minnesota National Guard to assist with bringing control to the city.