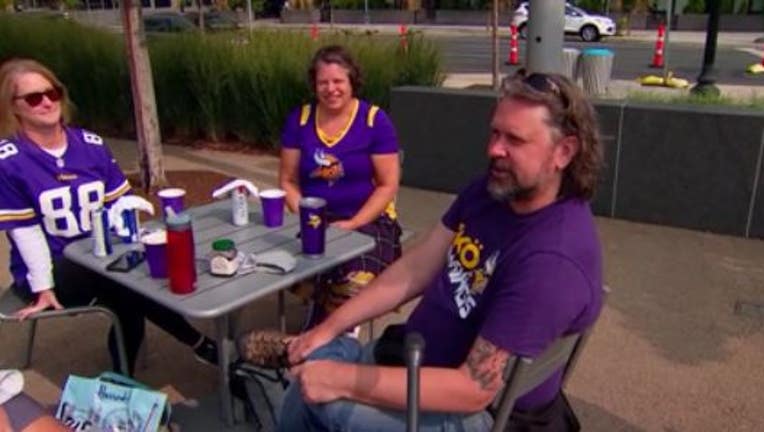 The few Vikings fans that made their way downtown Sunday lamented the lack of others as they sought ways to celebrate the purple.

MINNEAPOLIS (FOX 9) - On a normal Vikings game day in Minneapolis, more than 70,000 people would pack U.S. Bank Stadium to cheer on the purple and gold, but this Sunday was anything but normal.

Some dedicated fans were still showing their team the love even though most of downtown was pretty quiet for most of the day.

Fans, businesses looking for normal amidst most abnormal Vikings game day in Minneapolis

“It is a little bit different, but I’m ready to go,” said Troy Gordon, a Vikings fan.

Gordon and a group of die-hard fans were hanging out near the stadium Sunday, but Steve Johnson said the vibe downtown made for a weird experience.

“I get a general feeling that the game doesn’t matter as much as it normally does because it’s non-standard,” he said. “I don’t really know how to put it into context.”

This year, the light rail traffic is light and the parking lots were all but empty except for the random fans who wandered by.

Still, Lynette Simser says, while it’s different, the familiar feeling of week one is something she thinks everybody needs right now.

“The feeling of excitement at the beginning of every football season is the same. And even though all of this is different right now, the feeling of, oh my gosh, we have another chance to win the Super Bowl, I think this is our year, that still feels the same. That excitement is still there and that’s something we can all share,” she said.

A number of fans shared a similar sentiment Sunday, hoping that football season will bring a new sense of normalcy. Many of them are just hoping that the season lasts, too.

A quiet downtown on game day could also could spell trouble for some Minneapolis establishments, too.

Many bars and restaurants were already struggling without major events downtown for months and having to adhere to COVID-19 restrictions. While Sunday was not as busy as a normal game day, one restaurant owner said having the game on TV is better than nothing.

“Normally, it’s kind of standing room only, pre-COVID obviously. So, it’s quite a lot less business, but more than we’ve had,” said Paul Winge, the owner of the Crooked Pint Downtown.

Several bars and restaurants around the stadium are either temporarily or permanently closed.