(FOX 9) - A homeowner in Eagan is pushing to give homeowners more freedom from HOA’s when it comes to solar panels.

Nancy Simmet is the original owner of her home built in 1999 and decided a couple of years ago she wants to add solar panels to her rooftop.

"I got their bids and filled out the paper work for the homeowners' association (HOA) and I submitted it," Simmet told FOX 9. "The next day they rejected it. No call. No discussion. Nothing. And I’m like… no!"

Ever since Simmet has spent the majority of the pandemic doing her homework on the subject of solar. Now a member of the non-profit Solar United Neighbors, she’s working to change Minnesota laws, and prevent HOA’s from saying no to solar.

"Sometimes homeowners associations don’t’ have guidelines for solar panels. So sometimes it’s a matter of not having a policy in place," said Rep. Ami Wazlawik. "Or sometimes the HOA language is outdated."

Wazlawik says language changes since she first introduced the bill focused on HOA and solar panels in 2020 helped push the current version through the House of Representatives, and provide more clarity for HOA's and homeowners alike. The bill would only apply to standalone homes within HOA’s where homeowners wanting to install solar panels are already solely responsible for the roof.

"Hopefully we can cross the finish line this year with the bill," said Wazlawik. 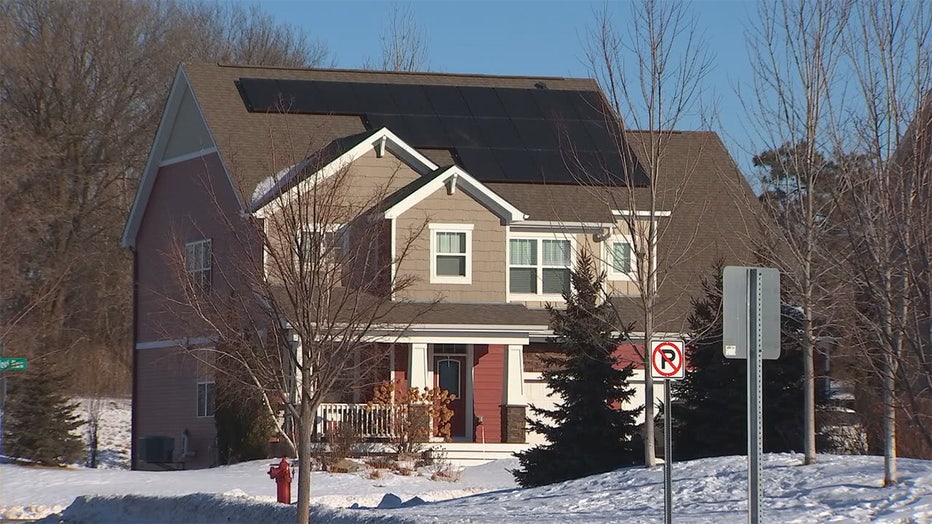 A homeowner in Eagan is pushing to give homeowners more freedom from HOA’s when it comes to solar panels.

According to Solar United Neighbors, about a quarter of Minnesotan’s live in one of 7,700 hundred HOA’s across the state, and 27 other states have laws that more easily allow HOA homeowners to "go solar."

Rob Appelhof, President & CEO of Cedar Creek Energy, a solar installer based in Blaine, has experienced HOA customers say both ‘yes’ and ‘no’ to solar panels. He’s confident this bill will go through because of the bipartisan support from lawmakers including Rep.  Wazlawik and co-sponsor Assistant Majority Leader Senator Karin Housley.

"That’s one thing we see with people who want to do solar, it’s not only one people from a certain political party… it’s everybody" said Appelhof.

The homeowners' association manager says in Simmet’s situation the reason her request was denied so quickly is there's language in the HOA about maintaining uniformity, and solar panels at one house would not comply with the regulation. The HOA manager goes on to say if state law changes that would change things.

"I would like to do my part and push Minnesota forward to be a little more progressive in this area," Simmet says. "I think we need that."