When a student lost his tooth somewhere on the playground, his principal stepped up and wrote a letter to the Tooth Fairy to make sure he would still be fairly compensated.

GILLETT, Wis. - When a first-grade student in Wisconsin lost a tooth, and then literally lost it on the playground, his elementary school principal stepped up to make sure the child would still receive his payout.

Curt Angeli, principal at Gillett Elementary School, wrote in a letter addressed to the Tooth Fairy that the student was playing outside at recess on Oct. 9 and lost his tooth.

Angeli writes that the baby tooth then became lost in the school’s “ga-ga pit,” an area for a dodgeball-like game where players hit the ball at each other with their hands and are eliminated if the ball strikes them on or below the waist.

Angeli said the student’s tooth was already loose when he went into the pit, and during the course of the game, he realized it was gone. The principal added that it may have been either swallowed or lost.

“Despite the valiant efforts of an intrepid search team, we were unable to recover the tooth,” Angeli explained in the letter. 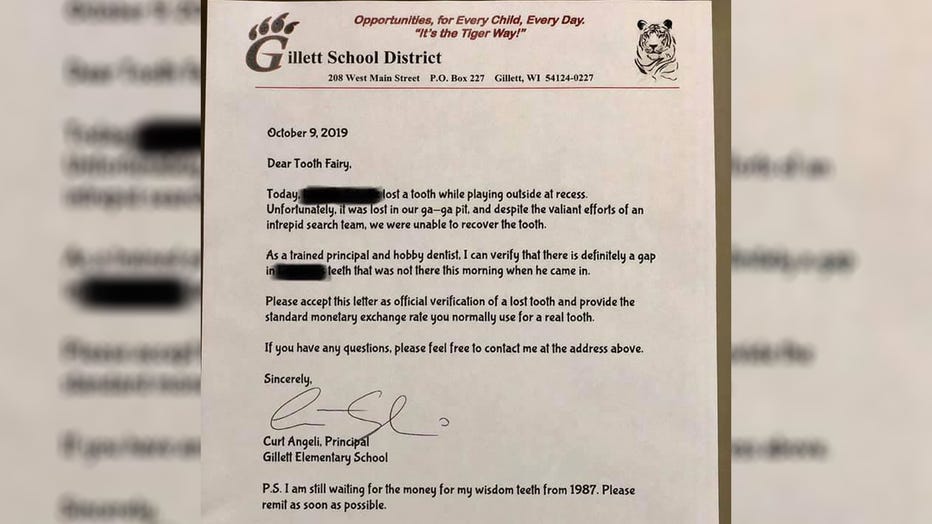 Angeli said the student is “actually quite a logical young boy,” and was very worried he would not have the proper capital for the Tooth Fairy exchange.

“One of my paraprofessionals suggested I write him a note so that he would have something to exchange,” Angeli explained in an email. “I just figured I would make it look as official as possible, in case the Tooth Fairy was suspicious.”

The principal, who calls himself a “hobby dentist," vouched for the student, writing to the Tooth Fairy that "he can verify that there is definitely a gap in (the student’s) teeth that was not there this morning.“

Angeli asked the Tooth Fairy to accept his letter as “official verification of a lost tooth and provide the standard monetary exchange rate you normally use for a real tooth.”

The principal jokingly added at the bottom of his letter that he was still waiting for compensation from wisdom teeth that he had removed in 1987.

And his letter worked. The student excitedly told Angeli the following Monday that he had received a dollar under his pillow.

Angeli is in his sixth year as principal at the school, but worked as a teacher in the district for 24 years prior.

“It's a wonderful family and community culture we have here, as many small-town schools have,” he said. “The boy's mother was actually my fifth-grade student 25 years ago.”