PORTLAND, Ore. - Stifling heat is expected to continue across many parts of the United States, prompting heat advisories and warnings from the fire-ravaged West to the Midwest and Northeast through Friday.

The National Weather Service said "dangerous" heat and humidity will impact the Pacific Northwest, Northeast and central portions of the country.

"The remainder of the work-week continues to look oppressively hot in the Northeast and the Pacific Northwest," the NWS said, adding that temperatures in the Northwest are expected to soar into the triple digits.

In Portland, Oregon, temperatures neared 100 degrees Fahrenheit on Wednesday. Volunteers and county employees set up cots and stacked hundreds of bottles of water in an air-conditioned cooling center in a vacant building in the city, which is part of a usually temperate region.

Oregon Gov. Kate Brown has declared a state of emergency and activated an emergency operations center, citing the potential for disruptions to the power grid and transportation. Besides opening cooling centers, city and county governments are extending public library hours and waiving bus fare for those headed to cooling centers. 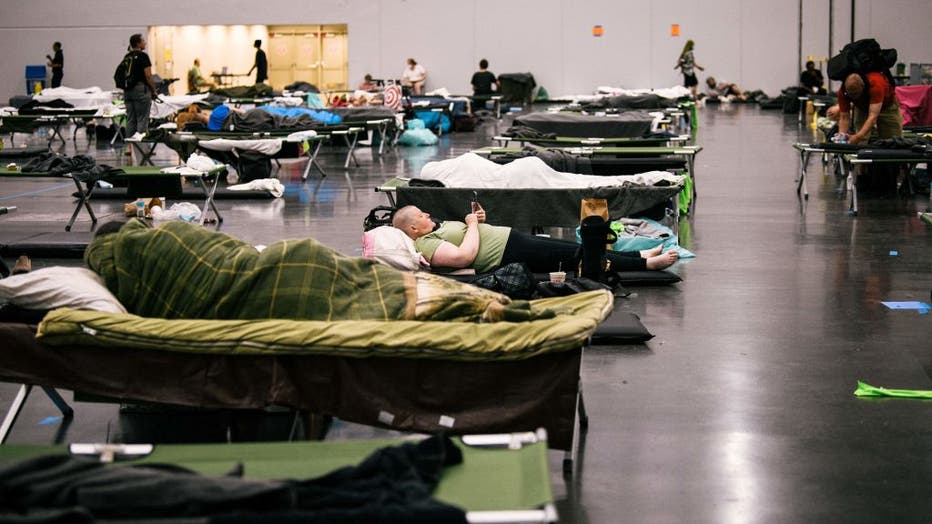 FILE - People rest at the Oregon Convention Center cooling station in Oregon, Portland on June 28, 2021, as a heatwave moved over much of the United States. (Photo by KATHRYN ELSESSER/AFP via Getty Images)

Seattle was forecast to be cooler than Portland, with temperatures in the mid-90s, but it still has a chance to break records. And many people there, like in Oregon, don’t have air conditioning.

Back-to-back heatwaves, coupled with a summer that's been exceptionally warm and dry overall, are pummeling a region where summer highs usually drift into the 70s or 80s. Intense heatwaves and historic drought in the American West have led to large wildfires and reflect climate change that is making weather more extreme.

Wildfires were burning across 14 states this week, according to the National Interagency Fire Center. On Wednesday, it reported 105 large fires that have burned a collective 2.4 million acres, with 87 of them currently in California, Montana, Idaho, Oregon and Washington.

In Northern California, crews continued battling the Dixie Fire — deemed the single-largest fire in the state’s history. The blaze began on July 13 and had burned over 780 square miles, destroyed some 550 homes and nearly obliterated the town of Greenville. It was 30% contained.

Wildfire smoke has resulted in poor air quality in the western and central U.S.

Meanwhile, severe thunderstorms on Thursday were forecast in areas from the Midwest into the Great Lakes. The NWS said some severe storms could also develop in the Ohio Valley and Mid-Atlantic.

By Friday, the storm threat will move into the South, while the Northeast and Mid-Atlantic regions could remain under the threat of severe weather, forecasters said.

Scattered showers and thunderstorms are also expected in the Gulf Coast Thursday afternoon and into the evening.

"Confidence is growing that Tropical Storm Fred will bring rain and wind impacts to Florida by this weekend," the NWS said.

The Tampa Bay area will likely feel Fred’s impacts on Saturday night into Sunday if Fred stays on the course predicted by the National Hurrican Center. Most likely it will be a "rainmaker," FOX 13’s meteorologist Dave Osterberg said.