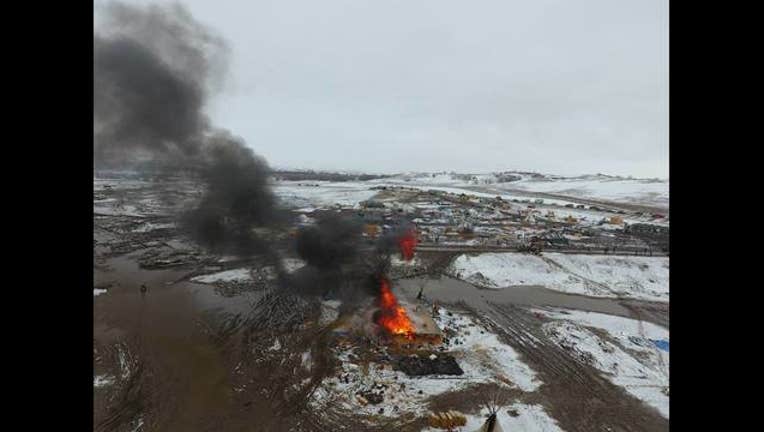 BISMARCK, N.D. (AP) -- The latest on plans to close a protest encampment near the Dakota Access pipeline construction site in North Dakota (all times local):

Police are arresting Dakota Access pipeline protesters who've failed to meet a deadline to clear a camp on federal land in North Dakota.

The Army Corps of Engineers ordered all protesters to leave by 2 p.m. Wednesday, citing concerns about potential spring flooding. About 150 people met that demand about 1 p.m. when they marched out of the camp.

Hundreds of law enforcement officers from several states were on hand to handle any arrests.

Some protesters set fire to wooden structures Wednesday morning as a part of a ceremony of leaving.

The pipeline will carry North Dakota oil through the Dakotas and Iowa to a shipping point in Illinois. Opponents say it threatens the environment and Native American sacred sites. Dallas-based developer Energy Transfer Partners disputes those claims.

Authorities in North Dakota say they have been negotiating with the last people left at an encampment set up to protest the Dakota Access pipeline over how to carry out ceremonial arrests.

The Army Corps of Engineers had set a 2 p.m. deadline to close the camp near a Missouri River reservoir after it was the center of pipeline protests for months.

Highway Patrol Lt. Tom Iverson says authorities didn't plan to negotiate after 4 p.m. But he said authorities aren't necessarily going to go in after that time to make arrests.

Most of the protesters walked out of camp earlier Wednesday, but those remaining put barbed wire across a camp entrance.

Some of the remaining protesters at the Dakota Access oil pipeline camp have set fire to a building that was serving as the main entrance to the area.

The U.S. Army Corps of Engineers set a 2 p.m. deadline Wednesday for protesters to leave the camp that's on federal land near the Standing Rock Indian Reservation. At least 150 people marched out of camp ahead of the deadline, but others have said they don't plan to leave on their own.

Nathan Phillips, a member of the Omaha Tribe in Nebraska, said he planned to move to another camp that's on private land. He says he has been in North Dakota since Thanksgiving and has "had four showers since."

A large group of protesters who were camped out at the Dakota Access oil pipeline were exchanging hugs and goodbyes after marching out of the camp ahead of a departure deadline set by the federal government. Many of them cried.

The group sang songs and prayed as they walked along a highway and over a bridge atop the Cannonball River. On two occasions they had to clear the road to make room for ambulances.

A bus from the United Tribes Technical College in Bismarck, along with four vans and a truck towing a trailer from the Standing Rock Episcopal Church, were waiting to transport the protesters. The state arranged for the bus to bring campers to a transition center in Bismarck.

Raymond King Fisher, a protester from Seattle, was one of the leaders of the march. He called it a difficult and emotional day. He ended the parade by saying, "We go in peace but this fight is not over."

Authorities say one person has been burned in fires set by protesters as a longstanding encampment near the Dakota Access oil pipeline is shut down in North Dakota.

Cecily Fong, a spokeswoman for the state Department of Emergency Services, says the extent of the unidentified female's injuries weren't known. Fong said an ambulance was being sent to the encampment.

Most of the 200 to 300 protesters who remained at the encampment walked out around 1 p.m. That was about an hour ahead of a deadline set by the U.S. Army Corps of Engineers for the camp to close ahead of a spring flooding threat.

It wasn't known where the protesters were headed, but authorities had several buses ready to carry them to Bismarck for food, lodging and help getting home. Some protesters have vowed to camp elsewhere on private land.

About 150 protesters are marching arm-in-arm out of the Dakota Access pipeline protest camp while singing and playing drums.

They leave behind the smoldering remains of structures that were burned as part of a ceremony.

The campers were headed down a highway near the camp, but it's unclear where they're going. The U.S. Army Corps of Engineers set a deadline of 2 p.m. Wednesday for protesters to clear the area.

Several of the marchers carried signs. One man carried an American flag hung upside down

About 20 people say they aren't leaving the Dakota Access pipeline protest camp and are willing to get arrested.

Fifty-year-old Charles Whalen, of Mille Lacs, Minnesota, says the group plans to offer "passive resistance" should law enforcement choose to enforce a 2 p.m. Wednesday departure deadline set by the U.S. Army Corps of Engineers. Whalen says the group is not going to do "anything negative."

Whalen, who is of Hunkpapa and Oglala descent, says he's encouraged by the protest effort and believes it will open discussions on treaty rights.

Another camper, Matthew Bishop, of Ketchikan, Alaska, was tying down his possessions on the top of his car and preparing to move to a new camp in the area. He says protesters plan to regroup and "see what we can do."

Cleanup efforts at the Dakota Access pipeline protest camp are on hold after negotiations broke down between authorities and camp leaders.

Crews have been working to tidy up the camp since January. Contractors were brought in last week to boost those efforts because authorities feared the onset of spring flooding at the camp near the Standing Rock Indian Reservation.

Camp wellness director Johnny Aseron says it's too muddy for trucks and other heavy equipment following winter rain and snow. Camp officials also took issue with plans by authorities to have armed police escort the equipment into the camp.

The Army Corps of Engineers has ordered the camp closed at 2 p.m. Wednesday.

Dakota Access pipeline protesters are ceremonially burning some of their living structures ahead of the closure of a longstanding camp in North Dakota.

About 200 to 300 protesters remain at the camp near the Standing Rock Sioux reservation. The Army Corps of Engineers has ordered the camp closed at 2 p.m. Wednesday, citing the potential for spring flooding.

Those left in camp milled about peacefully Wednesday, many in prayer. At least four wooden structures were being burned in what protesters say is part of the ceremony of leaving.

Nestor Silva, of California, says he is planning to move to a nearby camp being set up on land leased by the Cheyenne River Sioux. Law enforcement say they expect to make some arrests, but Silva says he doesn't expect any trouble.

Authorities in North Dakota are offering assistance and services to Dakota Access pipeline protesters as they close a longstanding encampment near the Standing Rock Sioux reservation.

Up to 300 people remain at the camp, down from thousands at the protest's peak. The Army Corps of Engineers has ordered the camp closed at 2 p.m. Wednesday, citing the dangers of impending spring floods.

They're planning to start buses from the camp to Bismarck at 9 a.m. But law enforcement officials say they expect some protesters won't leave without being arrested.

It also may not spell the end of heavy law enforcement presence near where the Dallas-based developer is finishing the last big section of the pipeline. When completed, the pipeline will carry oil from North Dakota through the Dakotas and Iowa to a shipping point in Illinois.

The protest camp has been around since August and at times housed thousands of people. The Corps has told the few hundred who remain that they must leave by 2 p.m. Wednesday. The Corps says it's concerned about potential flooding as snow melts.