WASHINGTON (FOX NEWS) - Crowds gathered outside of the White House as protests erupt across the country over the death of Minneapolis man George Floyd, bringing tensions to a boiling point and forcing one of the Twin Cities to issue a curfew while demonstrators clashed with police across the U.S.

The White House was put on lockdown Friday night after protesters gathered in the same areas.

Fox News and other members of the press were immediately moved inside as the White House went into lockdown. A dozen reporters were said to be inside the West Wing. One of the protestors was later taken into custody by the Secret Service outside the White House Friday night. 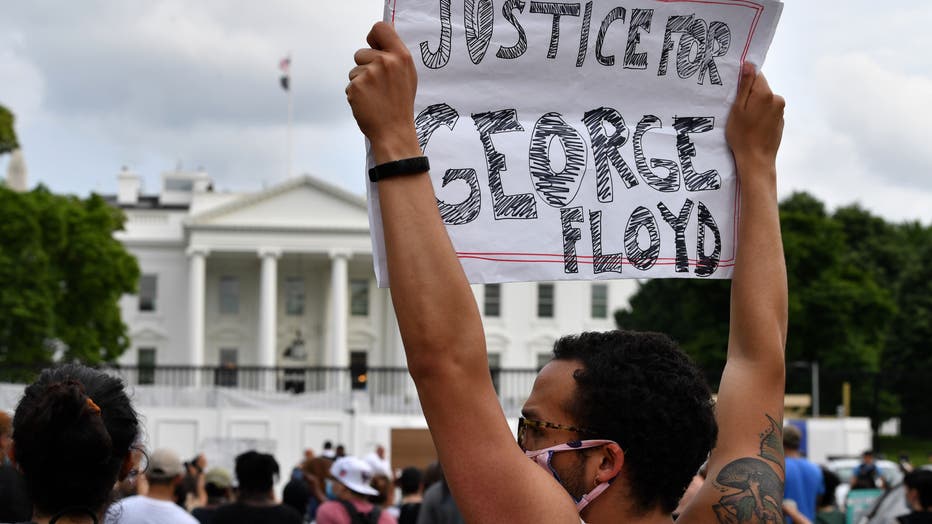 Protesters hold signs as they gather outside the White House in Washington, DC, on May 29, 2020 in a demonstration over the death of George Floyd, a black man who died after a white policeman kneeled on his neck for several minutes. - Demonstrations

Floyd, a black man, died in police custody this week after a white officer pinned him down by pressing his knee into the back of Floyd’s neck while Floyd repeatedly said he couldn't breathe. The officer, Derek Chauvin, was fired and on Friday was charged with murder. Three other police officers were also fired but have not been charged.

Minneapolis authorities have imposed an overnight curfew in an attempt to prevent more destruction and, at time, violent protests that had pursued for three days.

Protests have broken out across the country. In Atlanta, demonstrators spray-painted and broke windows of CNN’s Atlanta headquarters.

One protestor climbed up onto the CNN building and waived a “black lives matter” sign as hundreds of other protesters pelted police with bottles.

Police officers reportedly backed their lines away and ordered the protesters to leave, threatening arrest if they did not.

Several of the bottles thrown contained accelerate, and an American flag was lit on fire as protestors yelled at the police, “Quit your jobs.”

Protesters later threw rocks and smoke grenades into the lobby and fired BB rounds, according to reporters on the ground.

The protest reportedly started peacefully and quickly became destructive after there was an interaction between a police officer and a protestor outside the headquarters.

Protestors climbed onto parked police vehicles, smashed the windows and lit one of the cars on fire.

Several buildings in the downtown area in Atlanta have been vandalized, according to local news outlets.

Large crowds also took to the streets in New York City for the second day Friday. Roughly 70 people were arrested after the protests became rowdy, traffic was shut down and several police officers were injured.

Some of the protestors were said to be carrying brass knuckles and knives, while others reportedly threw trash and garbage cans at NYPD officers.

Protestors chanted "I can't breathe" -- the last words of Eric Garner, who died in police custody in 2014 after being taken down by NYPD officers on Staten Island, drawing a parallel to Floyd's death earlier this week.

A demonstration in Denver also turned violent Friday and three people were taken into custody.

“Let not the story be about the riots and protests. Let’s keep the focus on the life that was lost,” Denver Mayor Michael Hancock said.

"I want to express our nation's deepest condolences and most heartfelt sympathies to the family of George Floyd," President Trump said at a roundtable Friday. "I spoke to members of the family, terrific people."