Landen Walker and his family tie ribbons and say custom prayers over each blanket for the person receiving it.

DANVILLE, Va. - After being diagnosed with a rare brain tumor, a Virginia teenager is hoping to share the love and protection he felt from a prayer blanket by sending them to others who may be going through a hard time.

Landen Walker, 15, has undergone multiple brain surgeries since being diagnosed with a rare and highly aggressive brain tumor in his nasal cavity, called juvenile nasopharyngeal angiofibroma.

The high school freshman, who has given out nearly 100 prayer blankets to others, learned of the tumor last fall after suffering from nosebleeds. At first, doctors believed it was a polyp blocking his nostril, but after nasal sprays and antibiotics failed to help, a CT scan was recommended and showed a mass obstructing his nasal cavity and left septum, according to the Prayers for Landen Facebook page.

Although it was not cancerous, this type of tumor can expand “quickly and extensively,” according to medical experts. 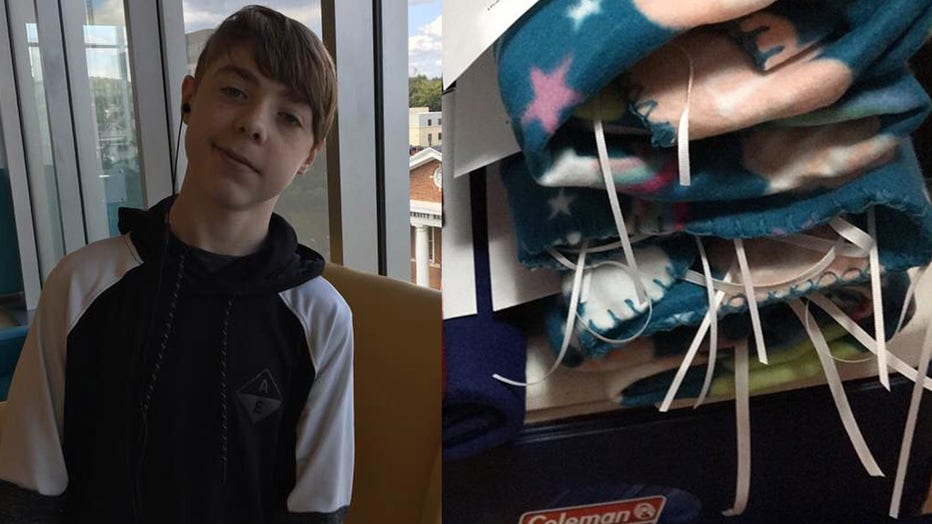 Landen Walker, 15, is pictured in an undated photo, alongside his prayer blankets given to people going through a host of tough situations, including cancer treatment, MS and more. (Photo credit: Provided /Prayers for Landen on Facebook)

Walker, who lives in Danville near the North Carolina border, had to undergo surgery for the tumor to be removed and was given a prayer blanket in early 2019. His mother covered him with the blanket and had friends, family and medical staff tie a knot in the blanket and say a prayer for the teen in anticipation of his medical procedure.

“I knew I was covered in love and prayers at all times,” Walker writes in a note given with his prayer blankets. “My family firmly believes in the power of prayer, and I am here to let you all know that praying works.”

Months later, scans revealed another tumor connected to the optic nerve carotid artery — an area of the brain that controls his nerves. The 15-year-old was forced to undergo another surgery, this time a more complicated one, to remove it.

Walker said he brought his blanket with him to a hospital in Pittsburgh for the procedure and had family and friends again tie knots and offer prayers.

“Once again, God proved me to be a miracle (by) removing the tumor successfully with none of the bad things they told us happening,” Walker, who is now recovering but faces the possibility of a tumor returning again, wrote in the note.

As a way to pay it forward, Walker and his family began making prayer blankets for others undergoing cancer treatment, surgery, multiple sclerosis, bullying, anxiety and more. The family ties ribbons and says custom prayers over each blanket for the person receiving it.

In total, they have given out 89 blankets and hope to continue blanketing others with good fortune.

Anyone interested in obtaining a prayer blanket or sending a donation was asked to send a message to the Prayers for Landen Facebook page.