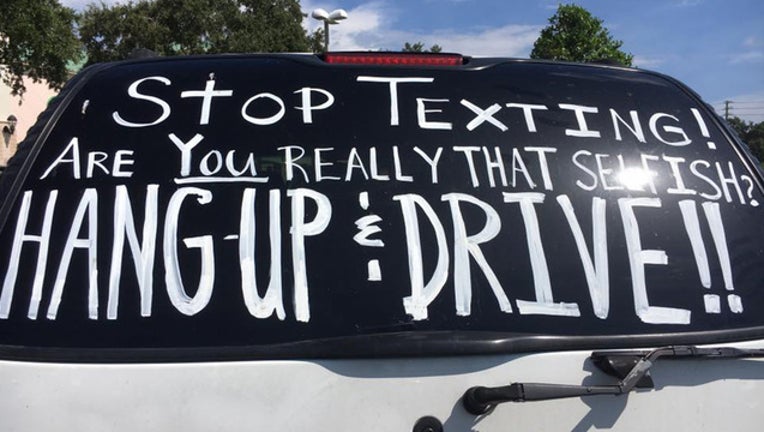 Clearwater police spotted this message on the back of a driver's car, parked at a grocery store. They snapped a photo, and shared it on their Facebook page saying, "Here's a message we saw the other day that we wish everyone would take note of."

CLEARWATER (FOX 13) - A “stop texting” message on the back of a vehicle caught the attention of the Clearwater Police Department, who echoes the sentiment.

The rear window of an SUV had the following written sign, “Stop texting! Are you really that selfish? Hang up and drive!!” which was written large enough, most likely for drivers behind the vehicle to read.

Clearwater police spotted the message in a grocery store parking lot. The agency took a photo, and shared it on its Facebook page saying, “Here’s a message we saw the other day that we wish everyone would take note of.”

In Florida, texting-while-driving remains a secondary offense, meaning it is illegal, but an officer has to stop a driver for another violation first. A bill to make it a primary offense stalled in the state Senate in February.

According to a recent AAA study, most drivers say distracted driving is a growing epidemic, and it is more dangerous than drunk driving because those surveyed believed it has increased in the past three decades. Almost half of the drivers in the survey say they regularly see other drivers emailing or texting while behind the wheel.