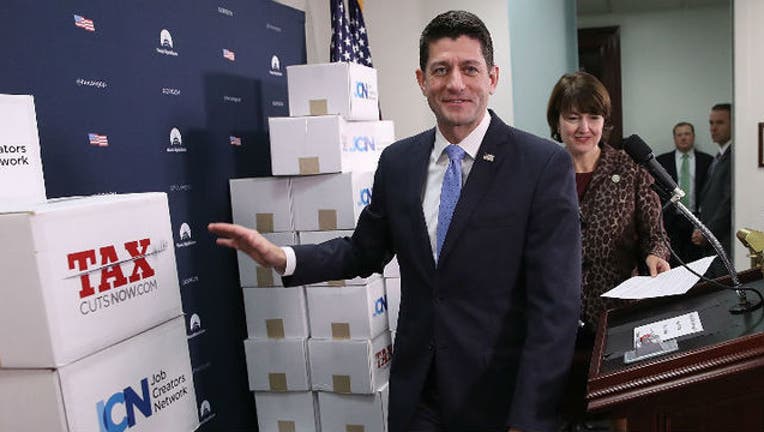 Speaker of the House Paul Ryan (R-WI) arrives for a press conference following a weekly meeting of the House Republican caucus November 14, 2017 in Washington, DC. (Photo by Win McNamee/Getty Images)

“This is the only way the public can express its voice on policies that are harmful to the general good and practices that are clearly undemocratic,” Mondale and Carlson said in a statement released through the office of Democratic Rep. Tim Walz. “We are fearful that some members will vote ‘yes,’ then announce their retirement to spend more time with their families and accept lucrative employment from those who reap the benefits.”

“As former public officials, we are increasingly concerned about the role of money in influencing public policy,” Mondale and Carlson said. “The United States House of Representatives is on its way to pass out major tax legislation without public hearings. In addition, they leak out information daily about the possibility of major changes, thereby preventing analysis and commentary. This is repugnant in a democratic society, period.  There are two certainties in the tax bill: large financial rewards to the Republican donor base and a massive increase in our national debt.”

The Mondale-Carlson challenge comes as 12 Republican members of the House have already announced plans to retire, and 10 more plan to leave their House seats to run for governor or the Senate.

The House is expected to approve the massive restructuring of the nation's tax code on Thursday. President Donald Trump will personally lobby for passage of the bill on Capitol Hill, but the arms that need twisting are in the Senate.

"I wouldn't vote for it just that simple, but doesn't mean I don't want to vote for a real solution and so that's why I'm working with the Senate, House and White House to get one,” Johnson said.

Johnson may not be alone. The tax bill was already going to be a tight vote in the Senate, where Republicans have just a two seat majority. Complicating the measure is a question about whether to repeal the Obamacare provision that forces everyone to obtain health insurance. The chief vote counter in the House thinks this will get resolved, but it depends on the Senate.

“Hopefully they get their bill out not long after Thanksgiving so that we can actually go to a conference committee and resolve the differences between the House and Senate and get a bill on President Trump's desk by the end of this year,” said Rep. Steve Scalise (R-Lousiana).