The Supreme Court refused to block a Texas law prohibiting most abortions after about six weeks of pregnancy.

WASHINGTON - President Joe Biden on Thursday slammed the U.S. Supreme Court’s decision to allow a Texas law that bans most abortions to remain in place, saying the move "insults the rule of law and the rights of all Americans to seek redress from our courts."

"The Supreme Court’s ruling overnight is an unprecedented assault on a woman’s constitutional rights under Roe v. Wade, which has been the law of the land for almost fifty years," Biden said in a statement. "By allowing a law to go into effect that empowers private citizens in Texas to sue health care providers, family members supporting a woman exercising her right to choose after six weeks, or even a friend who drives her to a hospital or clinic, it unleashes unconstitutional chaos and empowers self-anointed enforcers to have devastating impacts."

The high court voted 5-4 to deny an emergency appeal from abortion providers and others that sought to block enforcement of the law, which went into effect Wednesday. But the justices also suggested that their order likely isn't the last word on whether the law can stand because other challenges to it can still be brought.

The Texas law, signed by Republican Gov. Greg Abbott in May, prohibits abortions once medical professionals can detect cardiac activity, usually around six weeks and before many women know they’re pregnant. 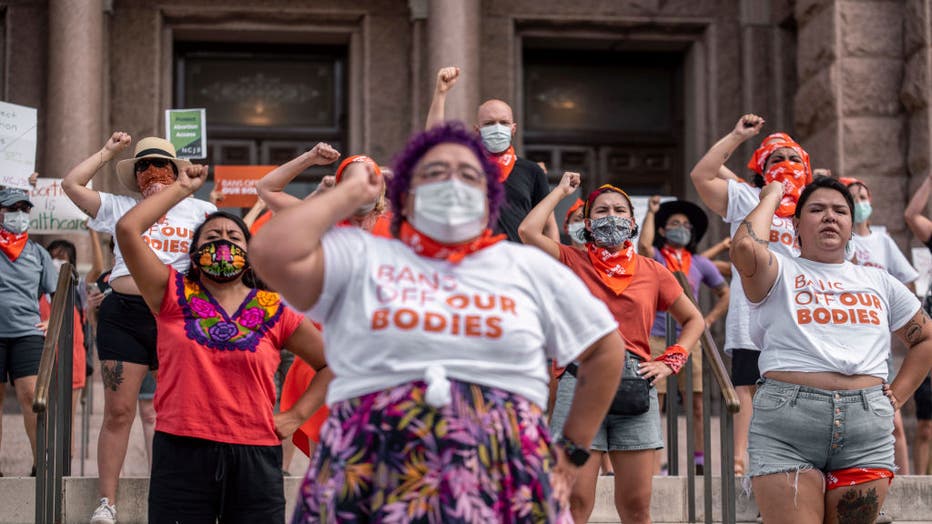 It is the strictest law against abortion rights in the United States since the high court’s landmark Roe v. Wade decision in 1973 and part of a broader push by Republicans nationwide to impose new restrictions on abortion. At least 12 other states have enacted bans early in pregnancy, but all have been blocked from going into effect.

Biden said in the statement that his administration will launch a "whole-of-government effort to respond to this decision" and look at "what steps the federal government can take to ensure that women in Texas have access to safe and legal abortions as protected by Roe."

Attorney General Merrick Garland said in a statement that the Justice Department was "deeply concerned" about the Texas law and "evaluating all options to protect the constitutional rights of women, including access to an abortion."

Texas lawmakers wrote the law to evade federal court review by allowing private citizens to bring lawsuits in state court against anyone involved in an abortion, other than the patient. Other abortion laws are enforced by state and local officials, with criminal sanctions possible.

In contrast, Texas' law allows private citizens to sue abortion providers and anyone involved in facilitating abortions. Among other situations, that would include anyone who drives a woman to a clinic to get an abortion. Under the law, anyone who successfully sues another person would be entitled to at least $10,000.

"Complete strangers will now be empowered to inject themselves in the most private and personal health decisions faced by women. This law is so extreme it does not even allow for exceptions in the case of rape or incest," Biden’s statement reads.

When asked by a male reporter why Biden supports abortion access amid his noted Catholic faith, White House Press Secretary said the president believes "it’s a woman’s right, it’s a woman’s body and it’s her choice."

'You've never faced those choices': Psaki fires back at reporter over abortion question

Chief Justice John Roberts dissented along with the court's three liberal justices. Each of the four dissenting justices wrote separate statements expressing their disagreement with the majority.

Roberts noted that while the majority denied the request for emergency relief "the court’s order is emphatic in making clear that it cannot be understood as sustaining the constitutionality of the law at issue."

In her dissent, Justice Elena Kagan called the law "patently unconstitutional," saying it allows "private parties to carry out unconstitutional restrictions on the State’s behalf." And Justice Stephen Breyer said a "woman has a federal constitutional right to obtain an abortion during" the first stage of pregnancy.

"We are celebrating this decision for what it is, baby steps in the right direction toward the obvious conclusion that Roe is fatally flawed and must go," said Kristan Hawkins, the president of Students for Life of America, in a statement.

Texas has long had some of the nation’s toughest abortion restrictions, including a sweeping law passed in 2013. The Supreme Court eventually struck down that law, but not before more than half of the state’s 40-plus clinics closed.