ORANGEBURG, S.C. - President Joe Biden pledged Friday to fight for stalled voting rights and police reform legislation, addressing South Carolina State University graduates while facing the harsh reality that months of talks have failed to move any of the bills a step closer to becoming law.

Biden spoke a day after he conceded that his nearly $2 trillion social and environmental bill was unlikely to become law this year due to continued disagreements among fellow Democrats. Republicans are united in opposition to the proposed spending.

Delivering the commencement address, the president bemoaned Republican opposition to voting rights bills that have stalled in the 50-50 Senate following passage by the Democratic-controlled House, telling his audience that "that other team" has blocked even debate over the measures.

"That other team. It used to be called the Republican Party," Biden said, digging at his political opposition. "But this battle's not over ... We're going to keep up the fight until we get it done."

Biden pledged a similar advocacy for police reform, another issue important to the Black community but that failed spectacularly in Congress after months of once-promising negotiations between Democrats and Republicans who could not reach agreement on a bill.

"The fight's not over," Biden said in his speech at the historically Black school in Orangeburg. It's the alma mater of House Majority Whip Jim Clyburn, a top-ranking Black member, who received his degree on Friday from Biden, a longtime friend. 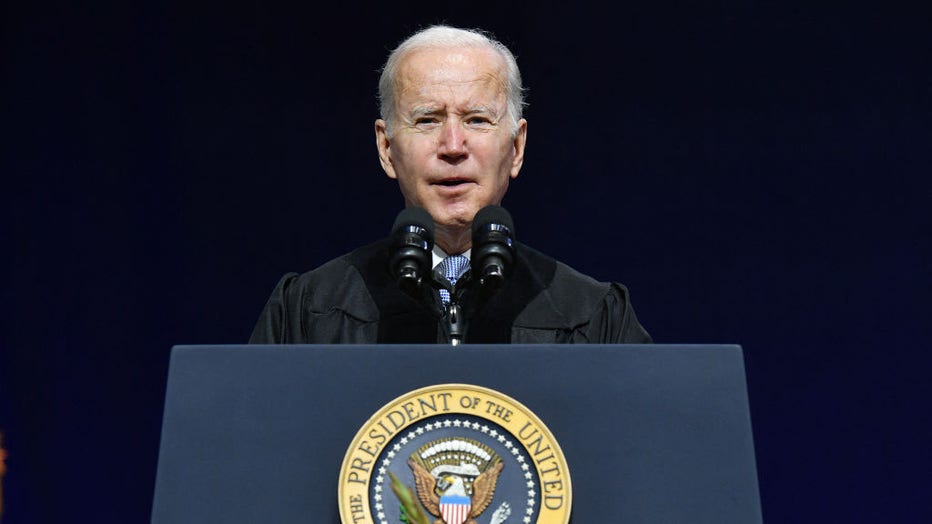 Biden touched on the infrastructure bill he recently signed into law, but avoided deeper discussion of his centerpiece social welfare and environmental bill. That measure remains stuck in the Senate, largely due to opposition from West Virginia Democratic Sen. Joe Manchin, and facing an uncertain fate next year when Democrats need accomplishments to show voters as they campaign for reelection in the November elections.

There were no December ceremonies when Clyburn graduated in 1961, so he received his diploma by mail. Instead of addressing this year's graduates, as had been planned, Clyburn marched across the stage with the students to receive his diploma from Biden, whom he invited to deliver the commencement address.

The president’s visit comes at a fraught time for his agenda, with the future of his $2 trillion social and environmental spending package in doubt. While Democrats had hoped to make progress on the bill before Christmas, continued disagreements among lawmakers have all but halted negotiations, and Biden himself has signaled Democrats should shift their focus to passing a voting rights bill — another heavy lift in the evenly divided Senate.

Biden has spent much of the week engaged in those legislative negotiations,.

In the address, Biden also pledged to help stamp out hate and racism, and talked about his appreciation for historically Black colleges and universities.

Biden and Clyburn had been planning a gathering in South Carolina, Clyburn told reporters this week, and they figured Friday's ceremony would suffice. The meetup is significant for both, in that it's Biden's first time as president in South Carolina, where Clyburn's public support is credited with boosting Biden him to the Democratic presidential nomination. 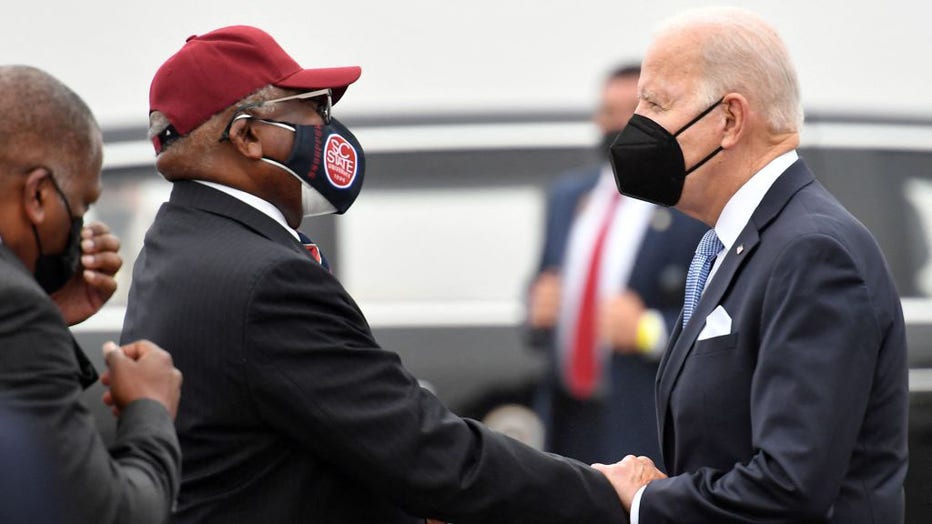 US President Joe Biden is welcomed by US Representative Jim Clyburn on arrival at Columbia Metropolitan Airport in West Columbia, South Carolina, on December 17, 2021. (Photo by MANDEL NGAN/AFP via Getty Images)

On the cusp of South Carolina’s first-in-the-South primary, after struggling through less-than-stellar performances in other early-voting contests, Biden secured a public endorsement from Clyburn, an awaited signal for many Black voters that Biden would be the candidate to stand up for their interests.

Clyburn has said he was glad to play a role in Biden's win but said the president had earned it.

Biden's roots in the state are much deeper than his 2020 campaign. Often coming to Kiawah Island near Charleston for family vacations, Biden also spent decades as desk mate to Fritz Hollings, South Carolina’s longtime Democratic senator. Biden eulogized Hollings at his 2019 funeral, a task he previously performed for another South Carolina senator, Republican Strom Thurmond.